The day began early with the smell of smoke in the air and the sleepy rational that someone next store had been barbecuing the night before. But the smoke and the smell were pervasive and we began to wonder if it would just “blow over”. It was early on, hard to make the call for the hike. Some emails set the scene:

“Safe and sound in west Sonoma county at my daughter in laws parents home. Fires raging in Santa Rosa. I could hear many explosions at 3 am and our neighbors dog continually barking coming through my dreamscape. My son Hunter contacted us from India to wake us up to flee. I suspect our houses are ok at this point. But who knows??
Warmly, Michael Ellis, Footloose Forays

Because of the fires in Sonoma and Napa Counties, Michael has evacuated west from his Santa Rosa home. He may – or may not – make it to our hike, but he said that we should still plan on meeting at the main parking lot at Limantour and hiking. ~ Jeannie

Huge fires here in Santa Rosa. Sebastopol ok so far. But I think I’m going to stay home. If I’m not at Point Reyes by 9.0am don’t wait for me. What are your cell numbers? Please leave on around 9.0am. Diana

Looks really bad up in the north Santa Rosa area, read that they evacuated Sutter and Kaiser Hospitals. Take good care of you and your Daches.
See from Michael’s email that he has evacuated from his house. I’ll be here at home until I head over to the Bovine at 8:45 AM. That’s the plan at the moment. Lew

Fingers crossed for the properties. Glad you are safe! Sue

I’m not coming. Just in case. Right now it’s west of me. I can hardly believe this. Have a good hike. Diana

Take care of yourself. Matt

I made it back home to pack a few things in case I need to make a run for it but it looks like they’re holding the fire about a half a mile north of me. Santa Rosa will never be the same. Warmly, Michael Ellis”

Heading out on the back roads to Pt. Reyes National Seashore we began to see the smoke blanketing the landscape. 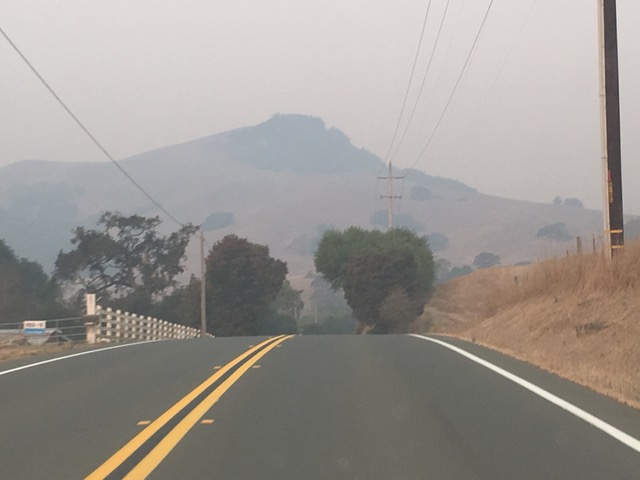 The back roads coming down from Sonoma County were crowded with refugees who had already fled the blaze and the smoke looking for a safe harbor in West Marin. All of Pt. Reyes Station was filled with evacuees and parked cars, most atypical for a Monday after the weekend. 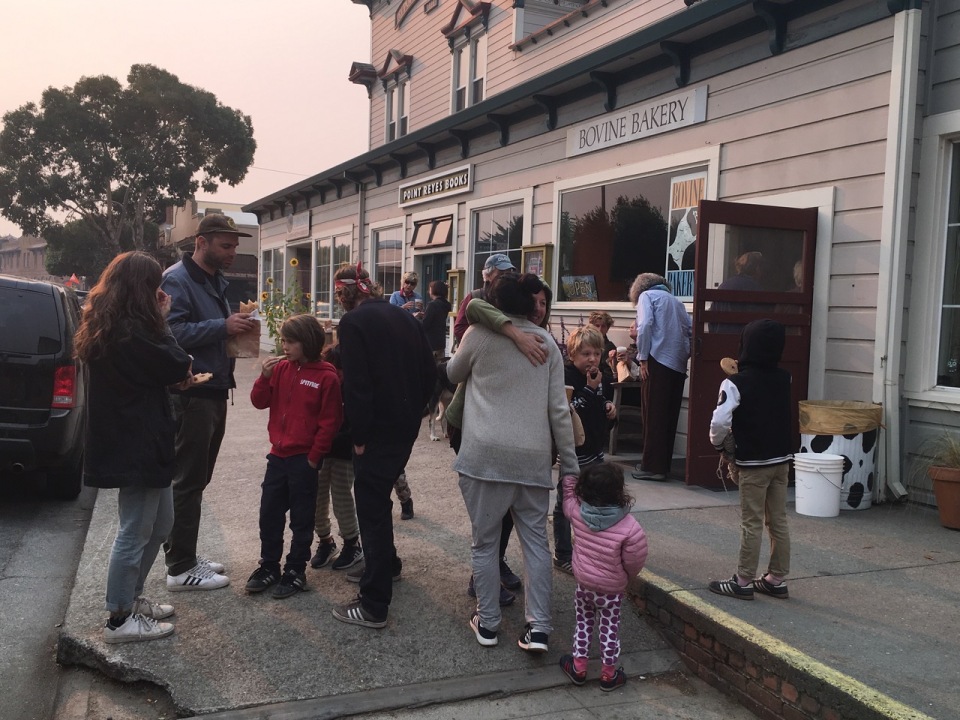 What would seem like a normal scene at the Bovine, but here uprooted families greeting each other in the smoky air, children full of energy and dogs lending their quiet support. 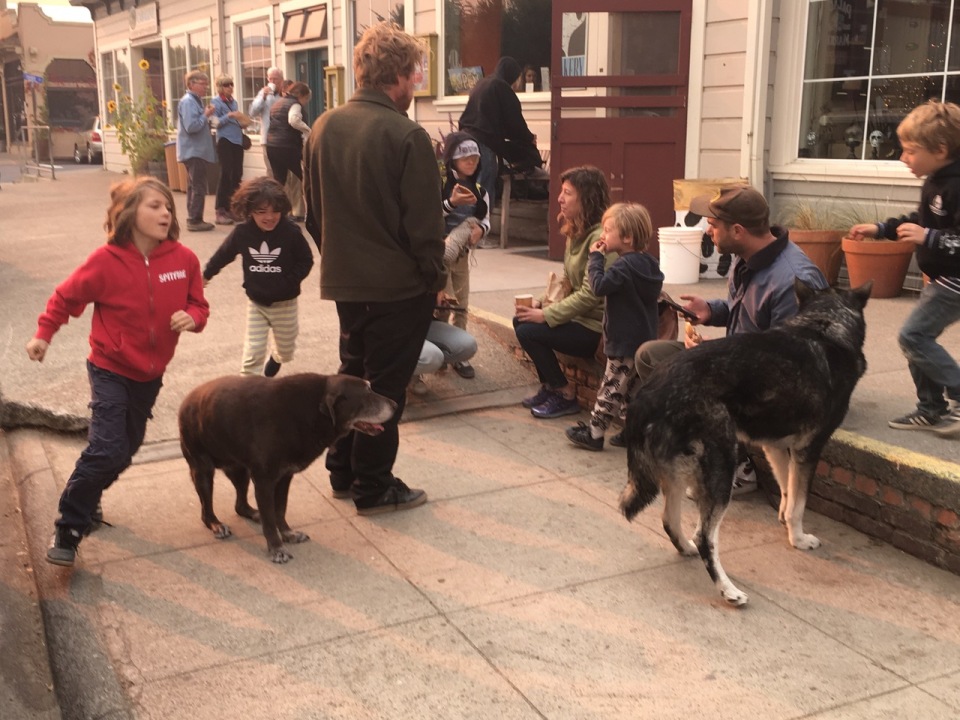 Even at Limantour Beach the smoke followed us. 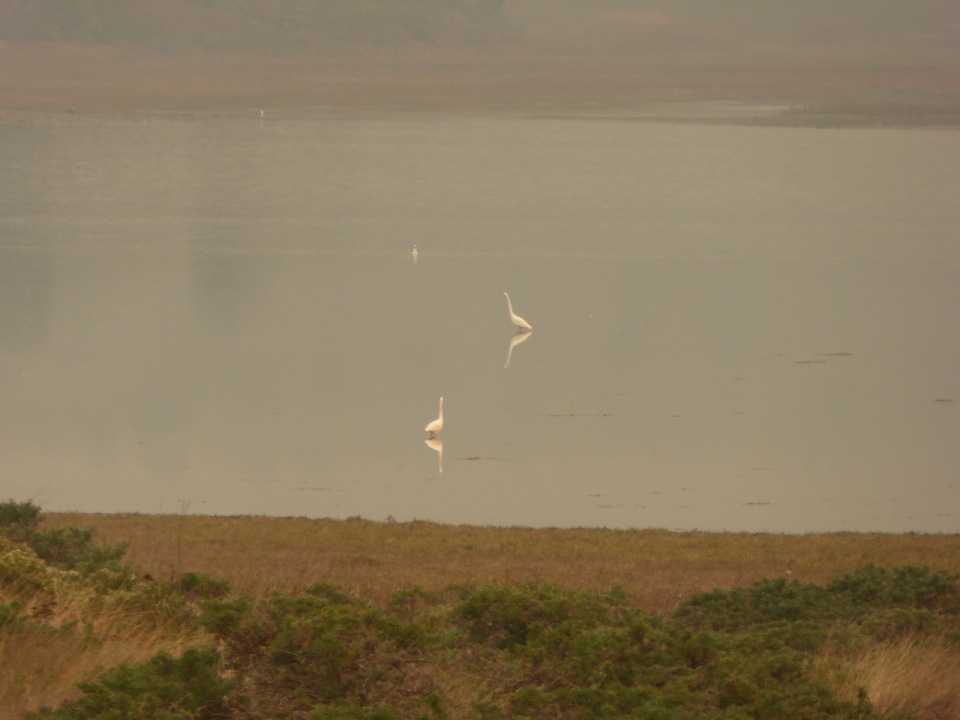 Kit’s carpool had brought bandanas for masking during the hike and she kindly loaned one to me. Thanks to Kit for the photo below. Heading out through the high European beachgrass the sky is orange with a smoky plume overhead, we’re walking just behind the beach in the dunes. Greeting our ears as we brush by are the sounds of the scratchy grass on our clothing and backpacks and in the background ocean waves finding the beach. 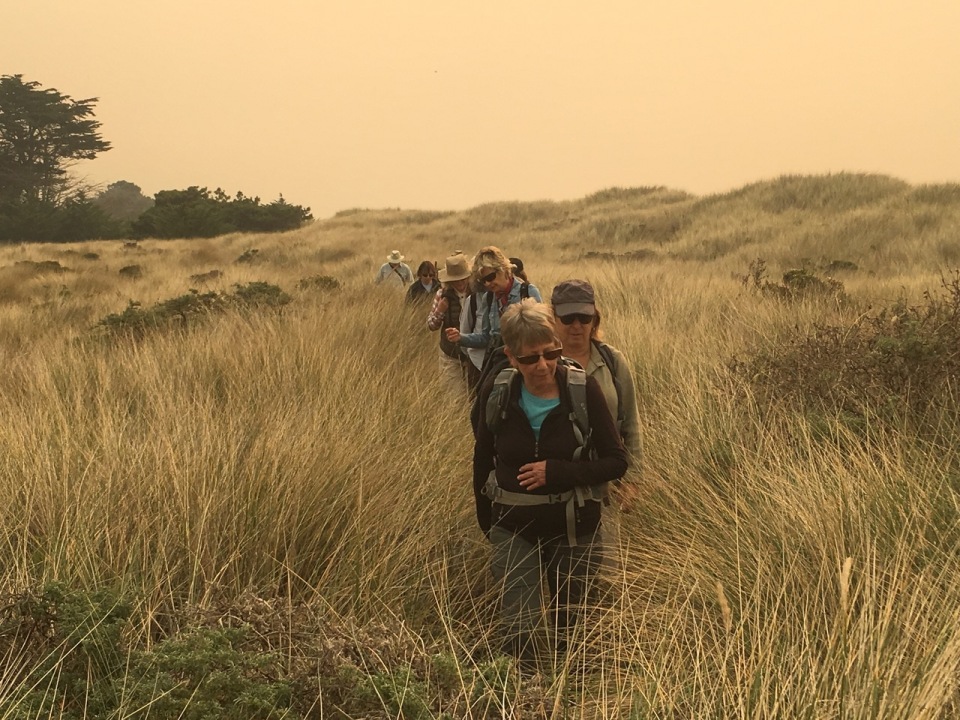 Cones of the Monterey Cypress and Monterey Pine extend out into the trail, planted in the 1960s as part of a fortunately failed housing development along the beach. Marin and Sonoma at the time were in the gunsights of developers who had great and monstrous plans to build a freeway to the coast and cover the land with housing and shopping centers. This was a time when a freeway was proposed down the center of Sonoma Valley and when PG&E blithely began to build a nuclear reactor at Bodega Head directly over the San Andreas Fault. http://www.whatmighthavebeen.org/stories-1/

Prior to this was the Reber Plan in the 1950s to “build two giant dams to transform most of the San Francisco Bay into two freshwater lakes which would have destroyed the estuary as we know it.” https://boomcalifornia.com/2015/04/14/the-man-who-helped-save-san-francisco-bay-by-trying-to-destroy-it/

The beauty of these cones belies their origin.

Here is the visitor guide printed for the 50th Anniversary of the creation of Pt. Reyes in 2012 which shares the beginnings of PRNS in clear, compact and compelling writing. https://www.nps.gov/pore/learn/news/upload/newspaper_visitorguide_2012.pdf There’s even a photo of Lady Bird Johnson, California Governor Pat Brown and Interior Secretary Stewart Udall getting their feet wet! 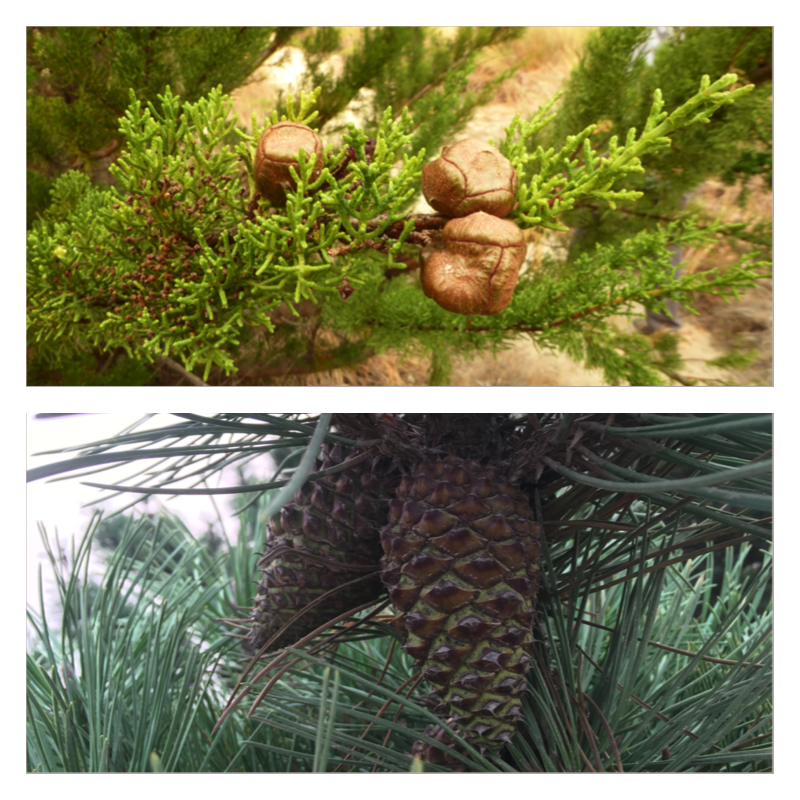 Monterey Cypress along the way both skeletal and virginal following the same lilt and design. 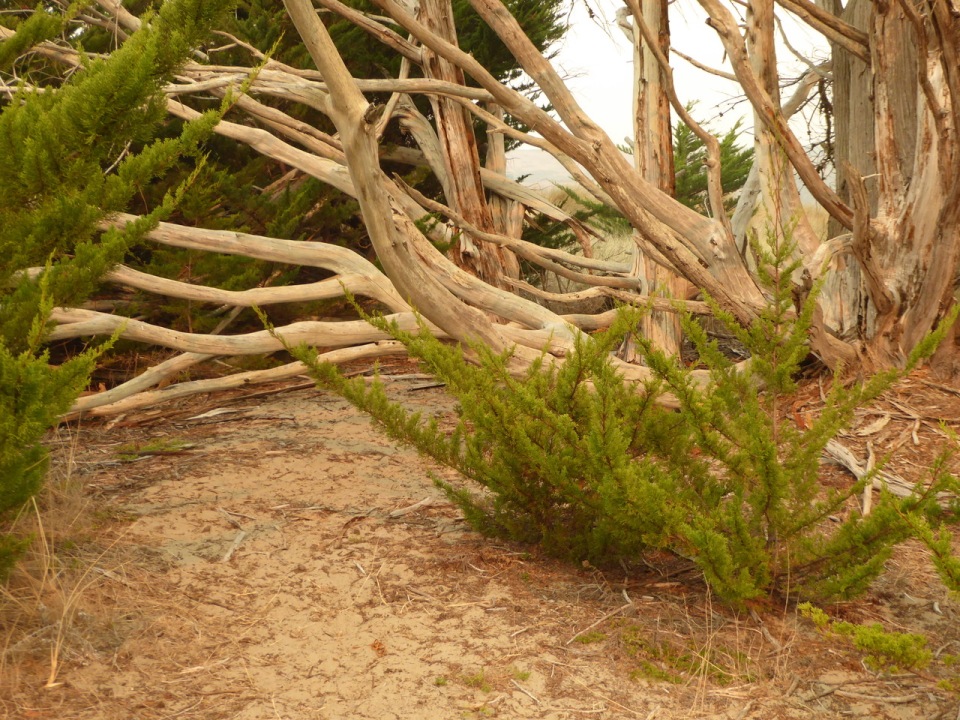 Time to head up over the dunes and see the waves that have been our background as we walked along. 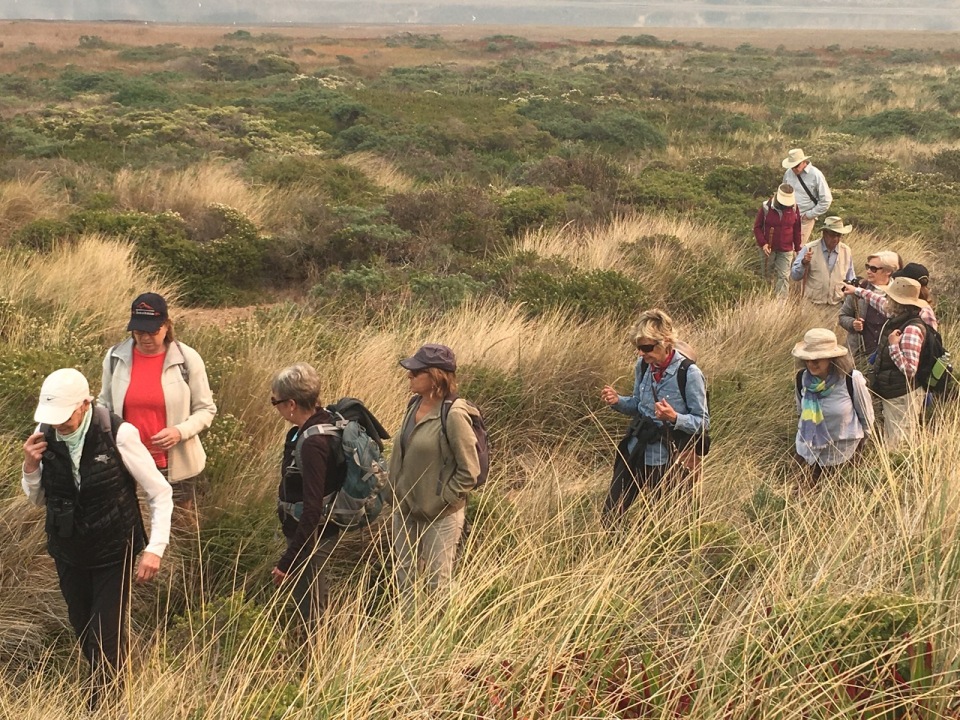 The sun back lights the incoming waves projecting a volcanic image of fire beneath the waves – earth, air, fire and water. 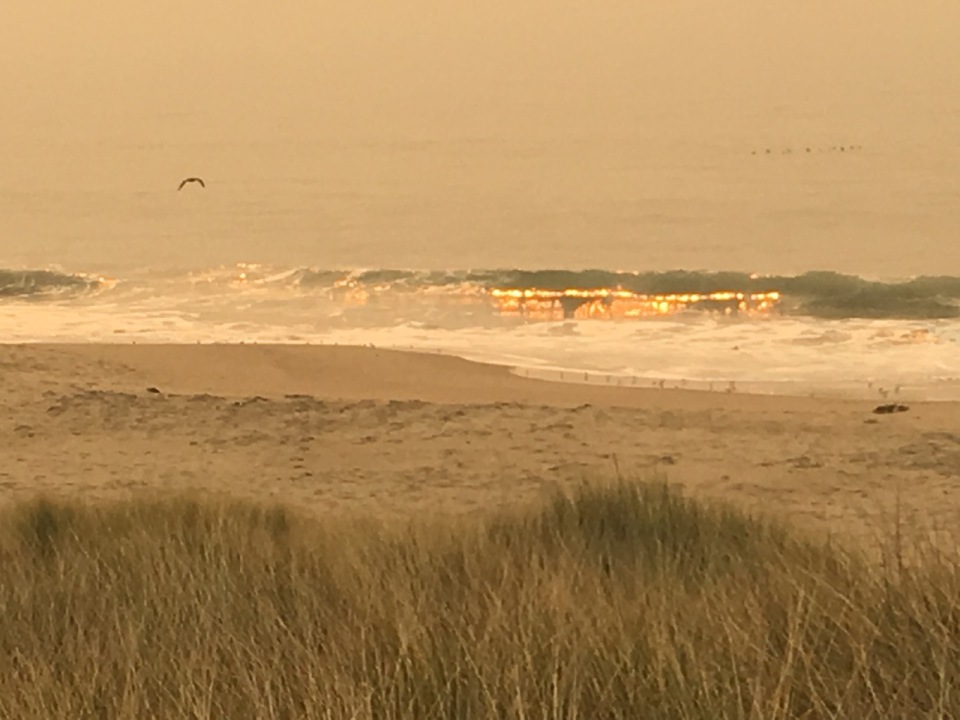 Jeannie reads a new email from Michael to our Footloose group on the beach:

I came back to my house to get stuff in case I need to do evacuate fast. I’m watching the fire is now in downtown Santa Rosa it’s all around Fountaingrove burning a lot of businesses

Birds are flocking to my backyard, the sun is orange and this morning the moon was orange. Those of us in this neighborhood seem to be OK right now. But I’ve got a few things packed just in case. They’re just things. My son is safe in India and my daughter-in-law ensconced with her parents in West Sonoma County. So all the important things are OK

Can you read this to the group ?

Yes
It could happen any time, tornado,
earthquake, Armageddon. It could happen.
Or sunshine, love, salvation.
It could, you know. That’s why we wake
and look out — no guarantees
in this life.
But some bonuses, like morning,
like right now, like noon,
like evening.
– William Stafford 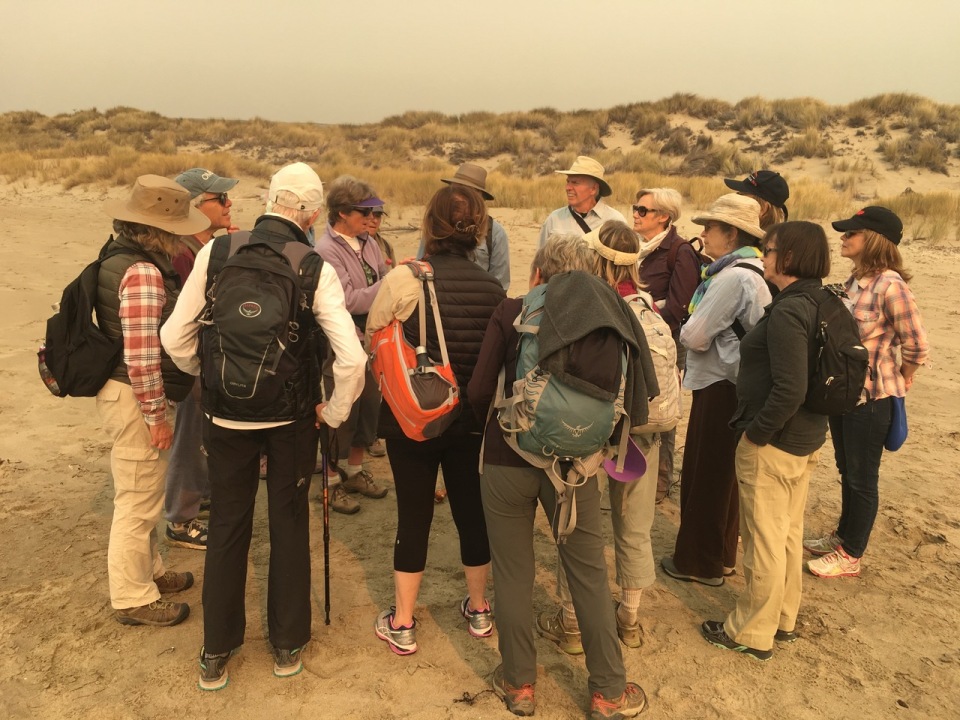 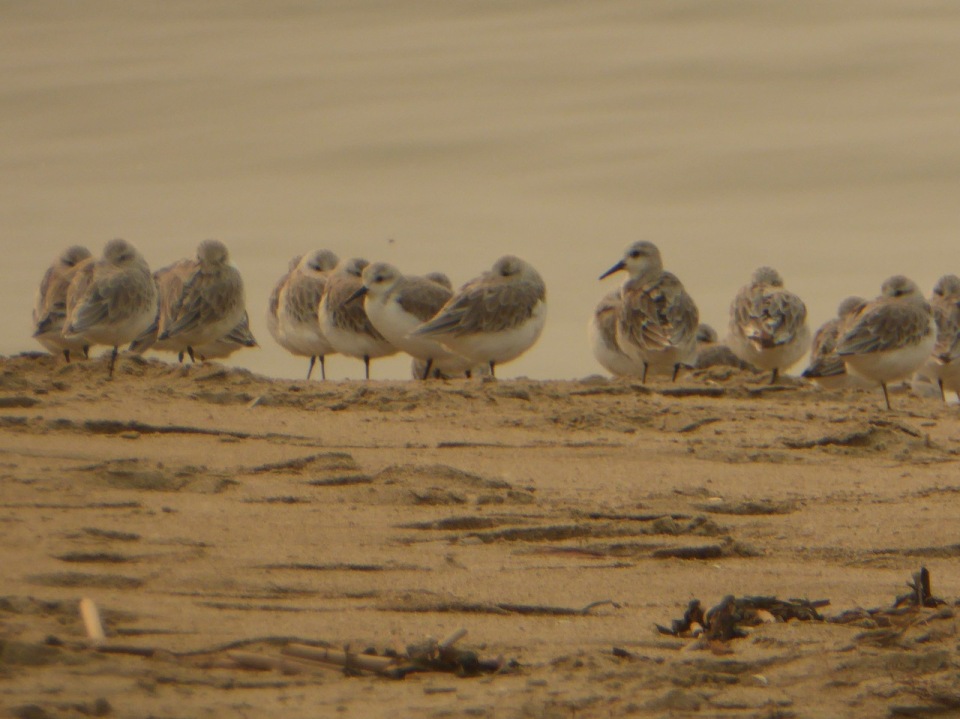 It’s “Maureen Time” for lunch so we pull up a friendly dune with an ocean view. 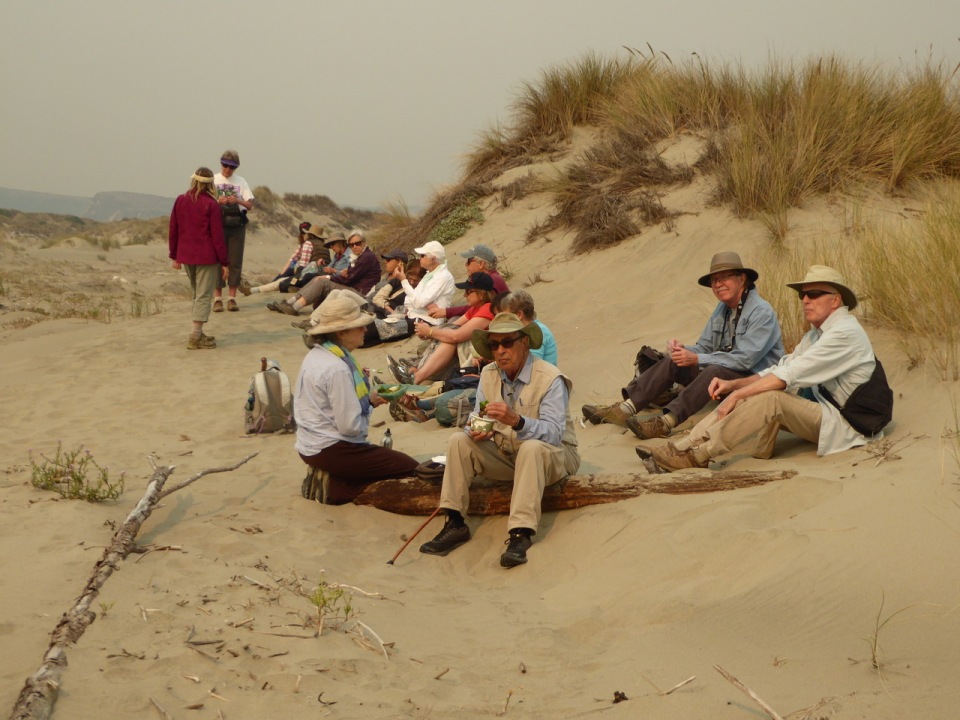 Being a beach, Matt shows us how to really take a break. 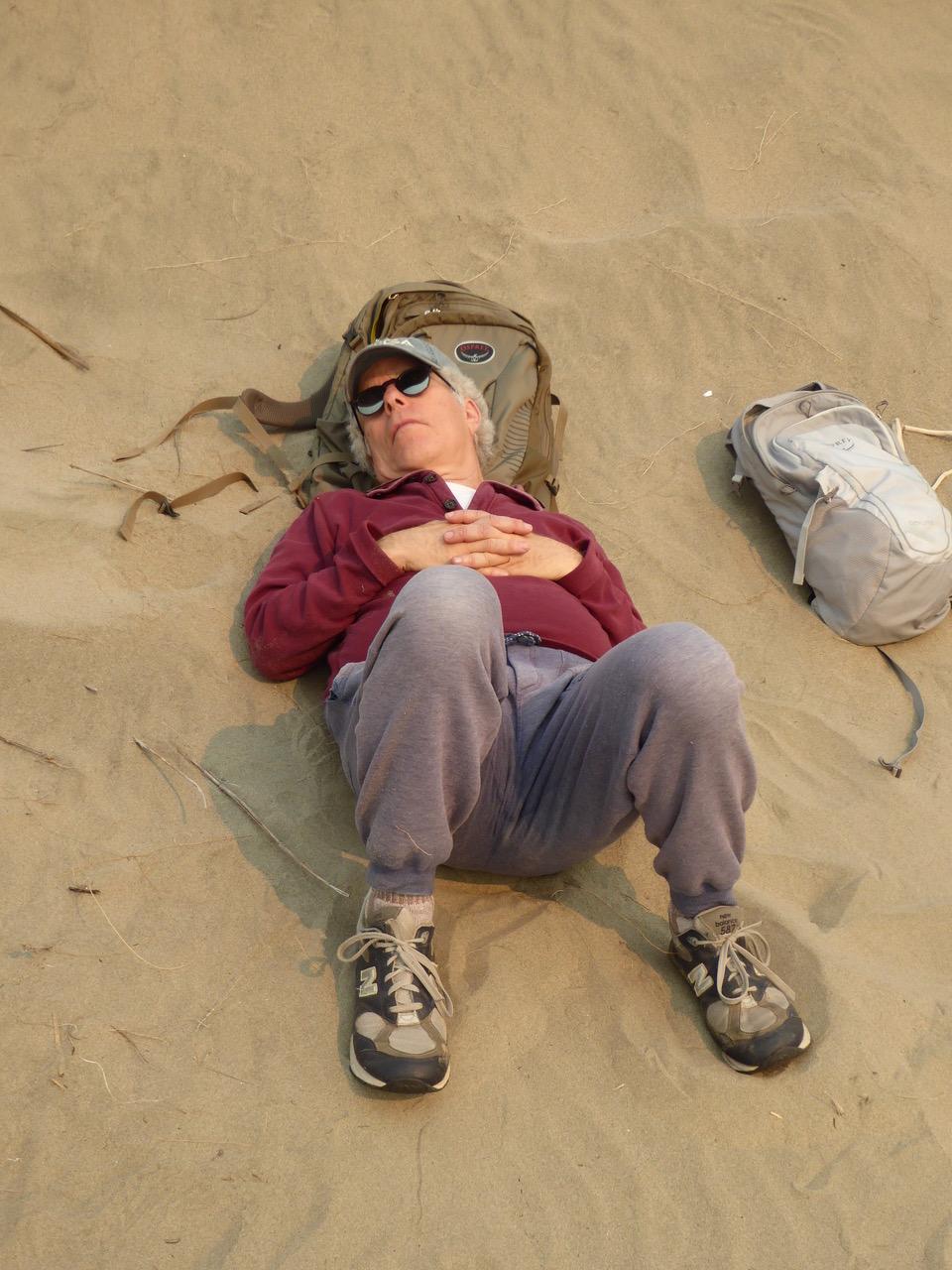 Nearby was some Sand Verbena (Abronia latifolia) living up to its name and decorating our “tables”. Here’s a lovely list, of nicely detailed Wildflowers at Point Reyes National Seashore and leading the charge is Yellow sand verbena (Viva Abronia!) http://www.americansouthwest.net/california/point-reyes/wildflowers.shtml The Beach Sand Verbena (Abronia umbellate) with its purple flower umbels is considered relatively rare. https://en.wikipedia.org/wiki/Umbel 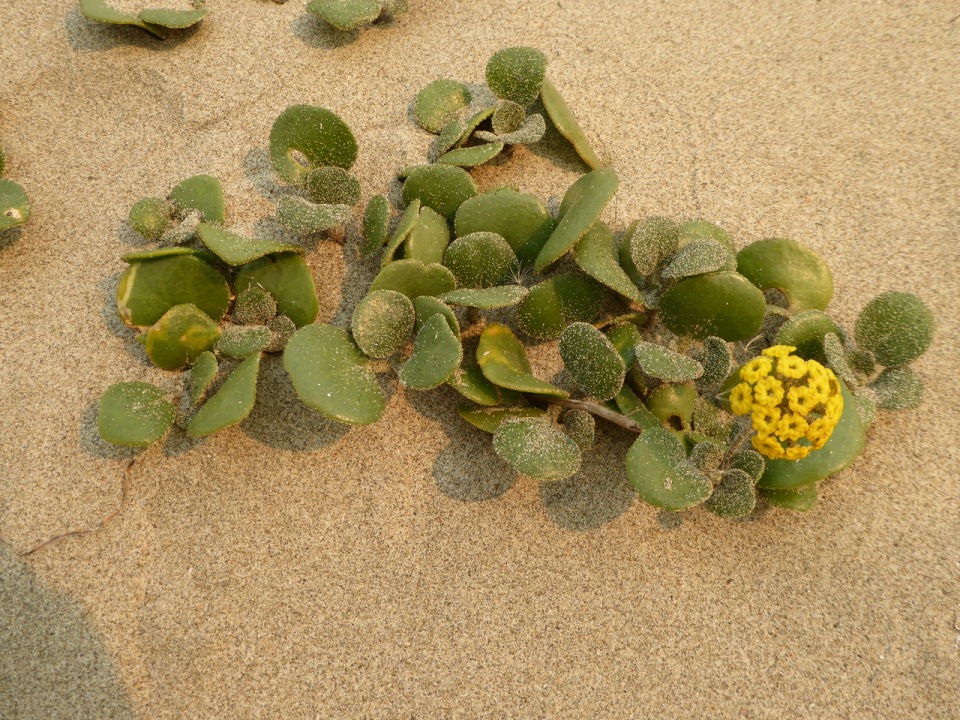 Armand spotted a sand dollar and shared it with the group. The following article refers to them as “a “species of extremely flattened, burrowing sea urchins belonging to the order Clypeasteroida.” https://en.wikipedia.org/wiki/Sand_dollar Etching front and back is fascinating. This one has symmetric holes unlike others that I’ve seen – why in some and not others? Heading back the presence of the waves in their steady tattoo lends a steadiness and security on the edge of the wild fires raging to the north.
Thanks much to Karin for this photo. https://vimeo.com/239270162 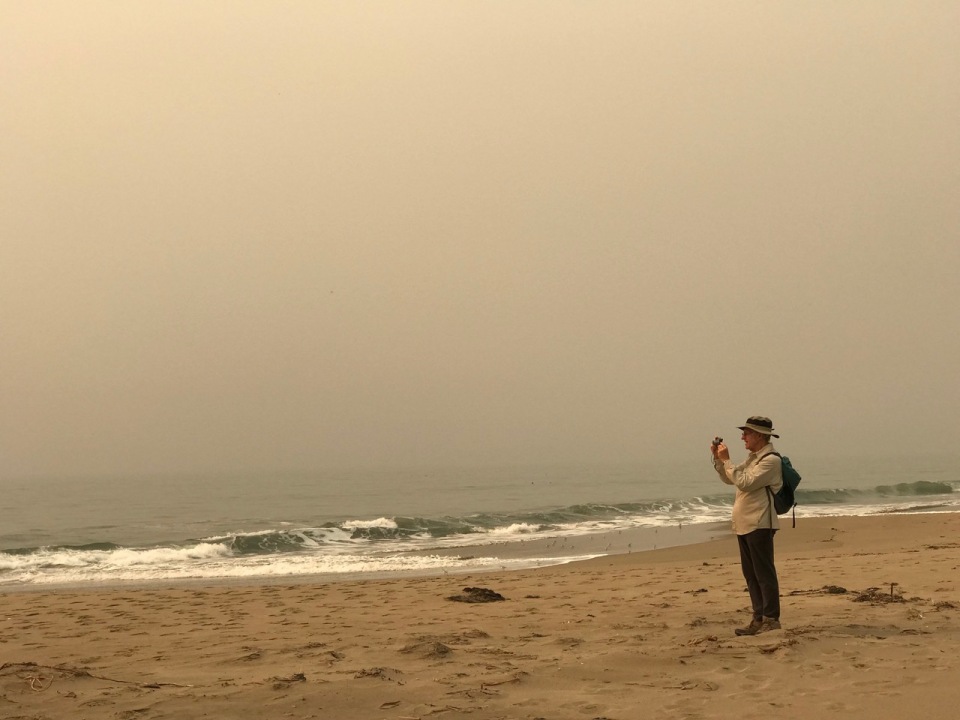 On the return we spot a Sanderling Ballet in the breaking waves. https://vimeo.com/239270521 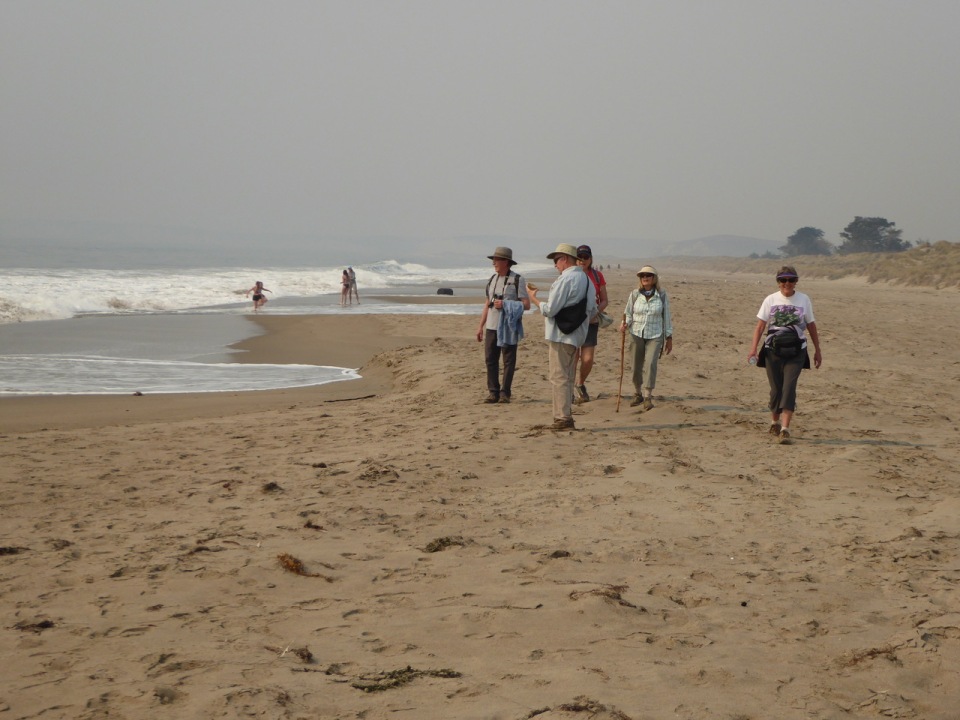 Home is the sailor 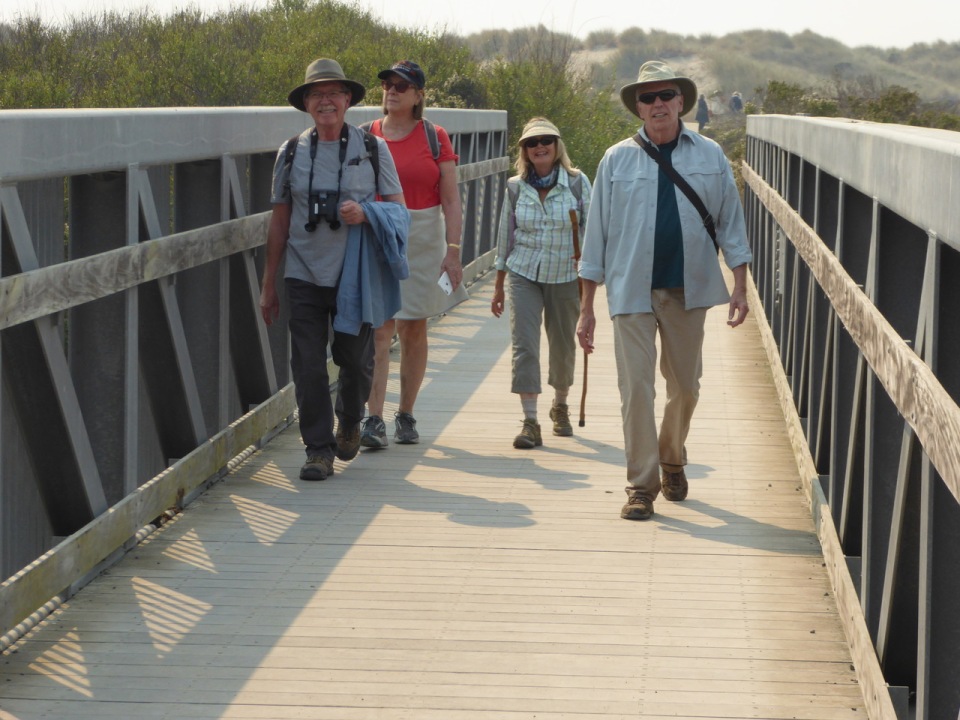