Mt. Vision was a new hike for us. We’d not done this as a group before and proved a happy proof of the theme for “Star Trek”. As William Shatner’s Captain James Kirk used to say, “Space, the final frontier, these are the voyages of the Star Ship Enterprise … our mission to explore strange new worlds, to seek out new life and new civilizations, to boldly go where no man has gone before.”

Our hike was purposely planned to be a recollection and remembrance of the Mt. Vision Fire which started 22 years ago on 3 October 1995 . As Dave Mitchell editor of the POINT REYES LIGHT wrote on the 20 year anniversary, “The Inverness Ridge Fire of October 1995 (a.k.a. the Mount Vision Fire was big — even for a state that has become accustomed to large wildfires. The amount of damage was staggering. The fire …. destroyed 45 homes in Inverness Park. The blaze charred 12,000 acres, including 15 percent of the Point Reyes National Seashore. It took firefighters five days to contain the fire and 13 days to fully stop its spread. Even so hotspots remained for a month. The fire was accidentally started by four teenagers camping on Mount Vision in the Pt. Reyes National Seasohore. Their campsite was illegal, although others had camped there before. The teens tried to be fire safe, carefully burying the ashes of their campfire under dirt and rocks before leaving. Over the next two days, however, the smoldering fire burned its way up through the forest duff, arriving on the forest floor during a high wind.” https://www.ptreyeslight.com/article/mount-vision-fire-what-happened

An assemblage of gathering hikers, their car pool steeds and a line of Bishop Pines all in a row. We’re all making long shadows again.

Michael introduces a friend of his with whom he graduated Oakridge High School, Oakridge, Tennessee in 1969 (?). Is my math right? I’m not questioning that they graduated! His friend Greg was in the Coast Guard and then wore a Captain’s hat on the Golden Gate Ferries followed by other headgear or none at all! 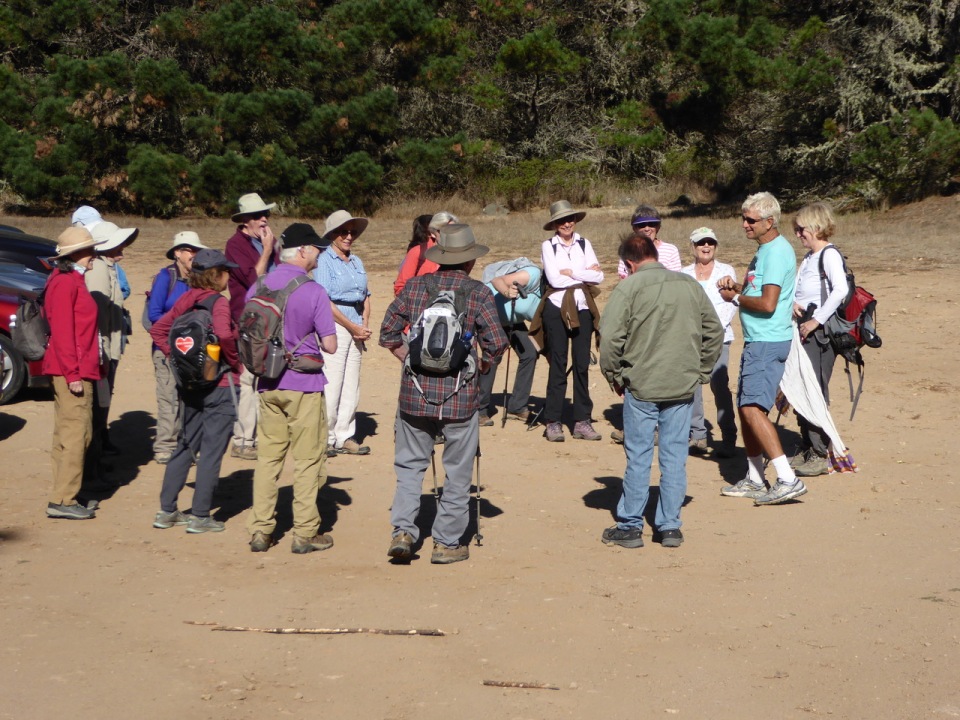 I’ve run into a lovely blog for our area called THE WILDFLOWER SCOUT by Sara Silver with superb and breathtaking wildflower and nature photos
along with lovely, eclectic writing all done with a neat touch of whimsey. Here’s a brief entry in her blog on Mt/ Vision:
https://wildflowerscout.wordpress.com/2014/02/23/mt-vision-pt-reyes-national-seashore/

And looking down the list for “Mt. Vision” you’ll eventually find advertisements for optometrists.

Elephant or Black Mountain from the crest looking east with some Bishop Pine and happily blooming Coyote Bushes (the showy white ones are the females and the muted yellow ones the males) in the foreground. Black or Elephant Mountain is a touchstone of western Marin County.
The curiously deep series of stream bed erosions distinguish this mountain from many others in the area. In a USGS evaluation of the Nicasio Reservoir terrane they suggest the area perhaps including Black Mountain “represents a fragment of a Late Jurassic-Early Cretaceous ocean island (similar to Hawaii)”. https://pubs.usgs.gov/mf/2000/2337/mf2337j.pdf In more recent history, this area was part of a much larger Mexican land grant. Normally these were manipulated away or brazenly stolen from Native Americans. An exception to this pattern was granting the area in 1843 to a Miwok Indian chief, Camilo Ynitia (one of two native American to receive such a land grant). “In 1852 Anita sold most of his land to James Black, who was on his way to becoming one of the largest landowners in Marin County.” The mountain acquired its Black Mountain name from him but as to the Elephant name, that may need more inquiry or even some speculation.
https://wandering-through-time-and-place.me/tag/james-black-of-marin-county/
http://www.malt.org/protected-lands/profiles-black-mountain-ranch http://www.summitpost.org/black-mountain-marin-county/833787
https://www.ptreyeslight.com/article/black-mountian-ranch-gets-organic-certification

https://en.wikipedia.org/wiki/Elephant_Mountain There are many Elephant Mountains but this link is about an album by the American rock band, “The Youngbloods, released in 1969.

Odd to find an FAA air traffic control unit out here but we’ve already seen that big dome still working on Mt. Tamalpais, they’re out there. There are many considerations for over-flying airplanes from noise abatement for ground dwellers to safety and sequencing for those in the air. The first map in this linked document shows this FAA arch over our heads. Fascinating later maps are quite revealing for the flight patterns over our heads and seem quite surreal but then we could take it to another level sometime mapping the satellite overflights as well adding to this picture.
http://www.flyquietoak.com/_source/pdf/Tab%204g%20PDF%20links/Local_Regional/Marin%20County%20Aircraft%20Noise%20Analysis%20Report_20

Taking a short turn down the Bucklin Trail, we head to the view of the Pt. Reyes Peninsula and Pacific Ocean beyond.

The ocean view with more coyote bush or brush in the foreground, first Limantour Estero with the water on the left, then Drake’s Bay with its distinctive exposed cliffs and to the right the blue of the large Drake’s Estero. That land mass before you get into a serious Pacific has Chimney Rock fingering out to the left and the hills of the point of Point Reyes to the right, just above the lighthouse. Probably you can’t spot a passing whale since it is a little early for that and they are still “krilling up” off Alaska. Michael is often able to spot the Farallon Islands out in the mist but you need a seasoned eye. 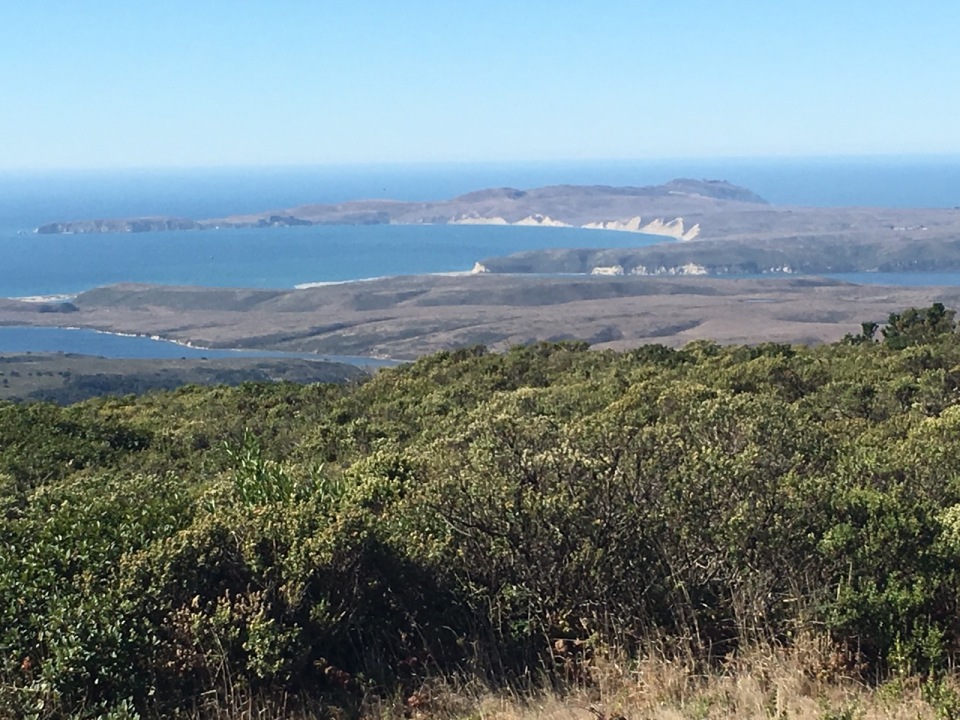 Often it’s said that the Spanish mariners missed San Francisco Bay because of the fog covering its mouth. In concert with that Michael mentioned that the main reason the passing Spanish galleons did not discover San Francisco Bay was actually more a matter of their routing miles out in the Pacific to avoid the dangerous coastal rocks in this area. Now interestingly, some of the air travel considerations involve routing airships out over the Pacific when that is needed. This seems almost a 500 year tradition!

We’ve just passed a mature Bishop Pine (perhaps just a tad senescent) that reminds me of a west coast tryout for Respigi’s “Pines of Rome.”
The wiki account records “The common name ‘Bishop Pine’ resulted from the tree having been first identified near the Mission of San Luis Obispo, California. . . . Other English names that have been occasionally used are prickle cone pine, Obispo pine, Santa Cruz pine and dwarf marine pine.” https://www.nps.gov/pore/learn/nature/plantcommunity_pineforest.htm http://www.stevenkharper.com/bishoppine.html

I like the Cell biology definition of “senescent” i.e. “(of a cell) no longer capable of dividing but still alive and metabolically active.” from Dictionary.com 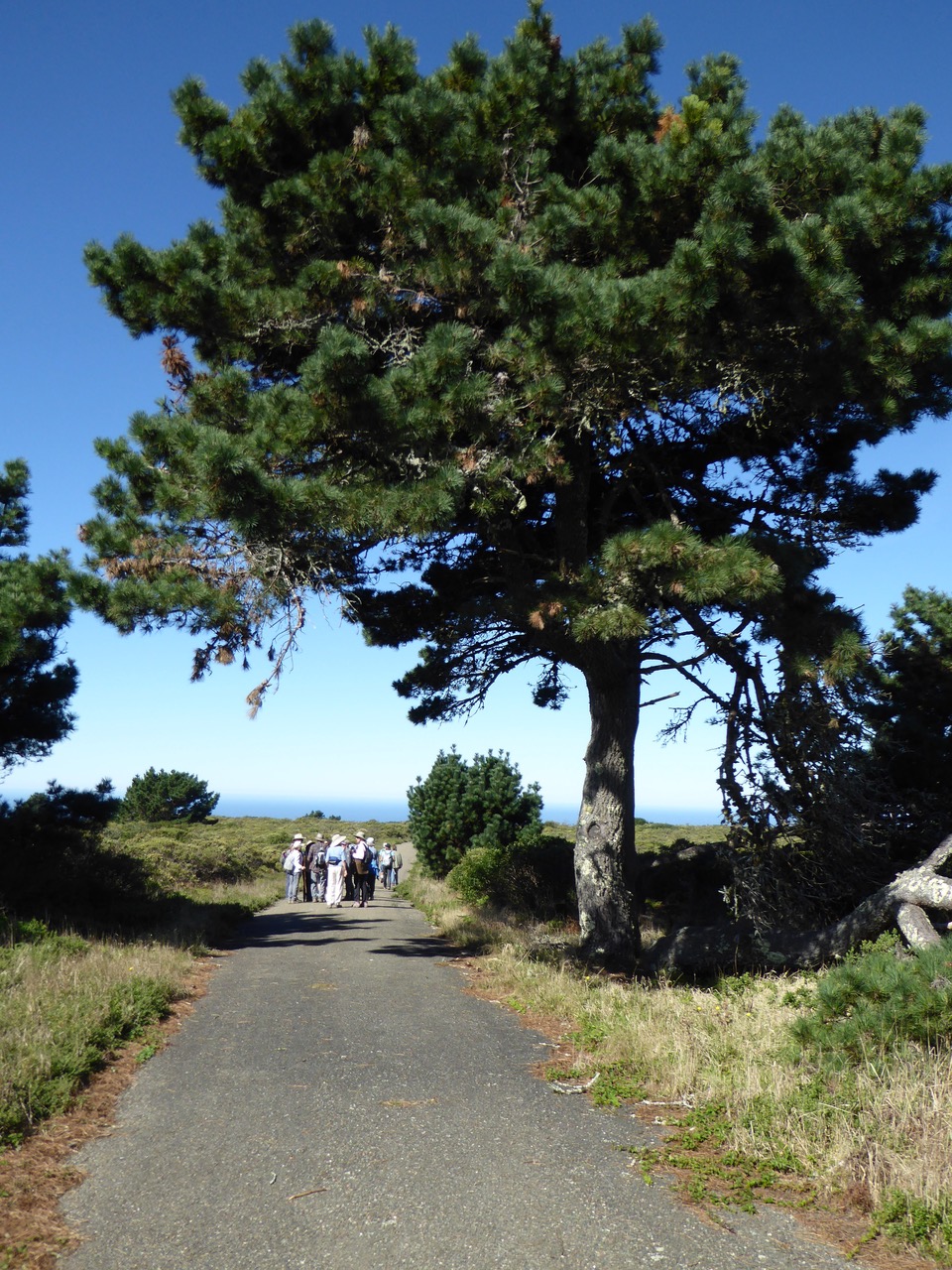 Some understory plants along the way, first the coyote bush we’ve mentioned. Atop is the female coyote bush in full bloom (a quite lyric moment) and below are male coyote bush to the left and the female to the right. http://sonomamg.ucanr.edu/Plant_of_the_Month/Baccharis_pilularis/

We enjoyed another view looking north and east. Below is Tomales Bay under which runs the San Andreas Fault separating the North American Plate from the plate which we are on, the Pacific Plate. http://online.sfsu.edu/bholzman/ptreyes/introgeo.htm
https://www.exploratorium.edu/faultline/project/day_07-5/day_07a.htm
On the horizon to the northeast and a bit right is the familiar profile of Mt. St. Helena and nearby to the left Geyser Peak. 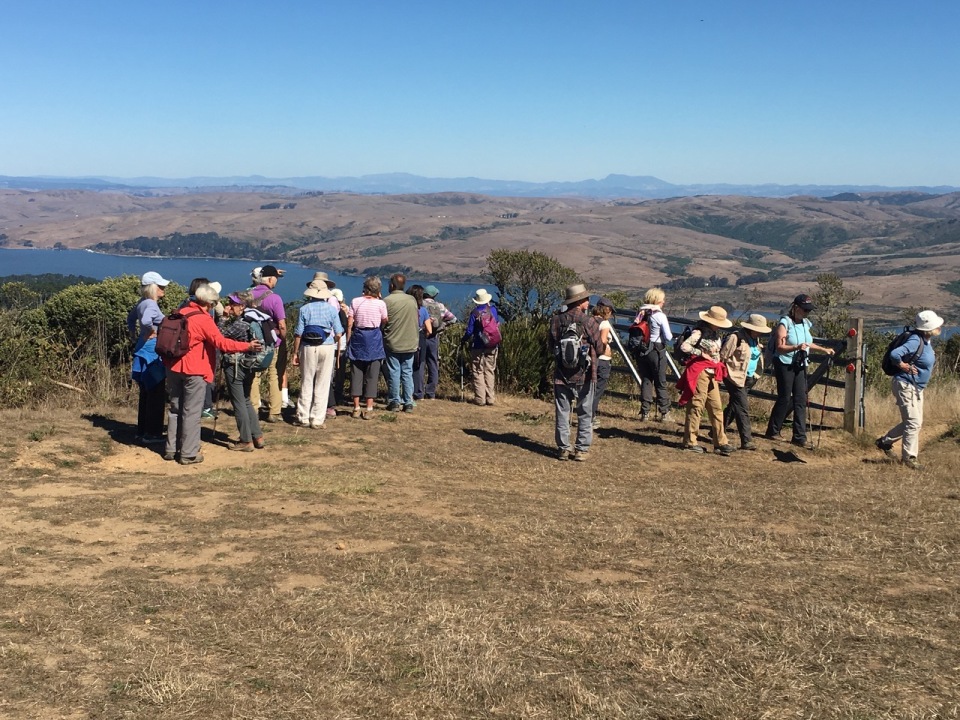 Having broken for lunch, we get it together to head back up the road to our parking area. 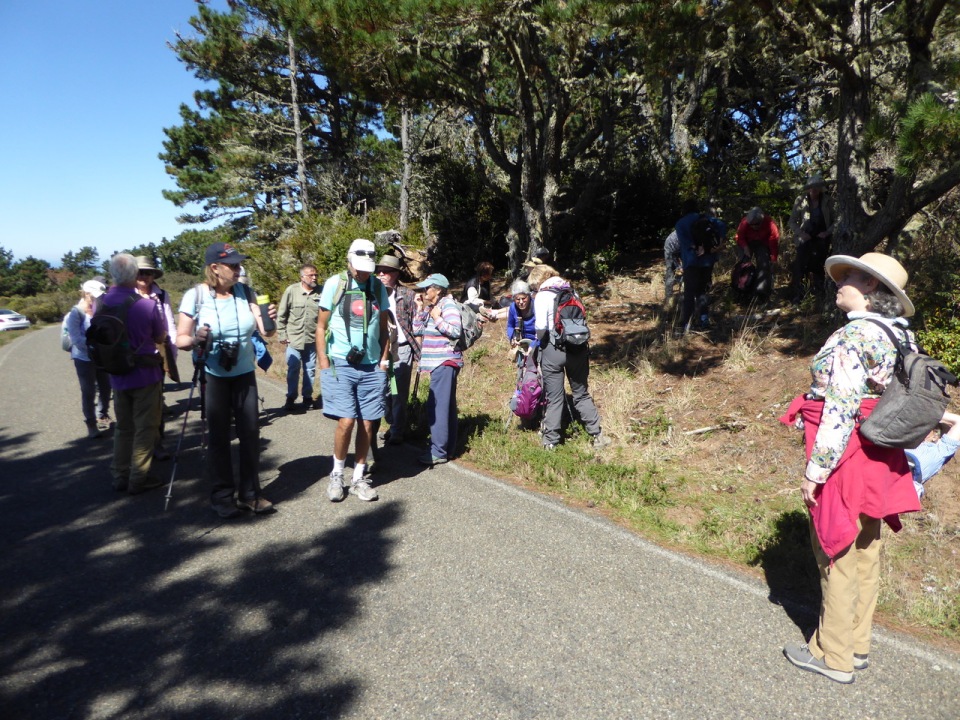 Looking west again we can see more of the expanse of Drake’s Estero which cuts deep into the peninsula. Below you can see the Christmas tree farm of yore (planted 55 years ago) that has grown into a mature forest happily enjoyed by owls and many other creatures. You can spot the bridge across the finger of the lagoon. We’ll be taking the Estero hike on October 23rd. You’ll recognize the bushes or brush in the foreground.

Ponds along the road I’d originally thought to be “stock ponds” but now I’m wondering if they have a more “geological” origin? 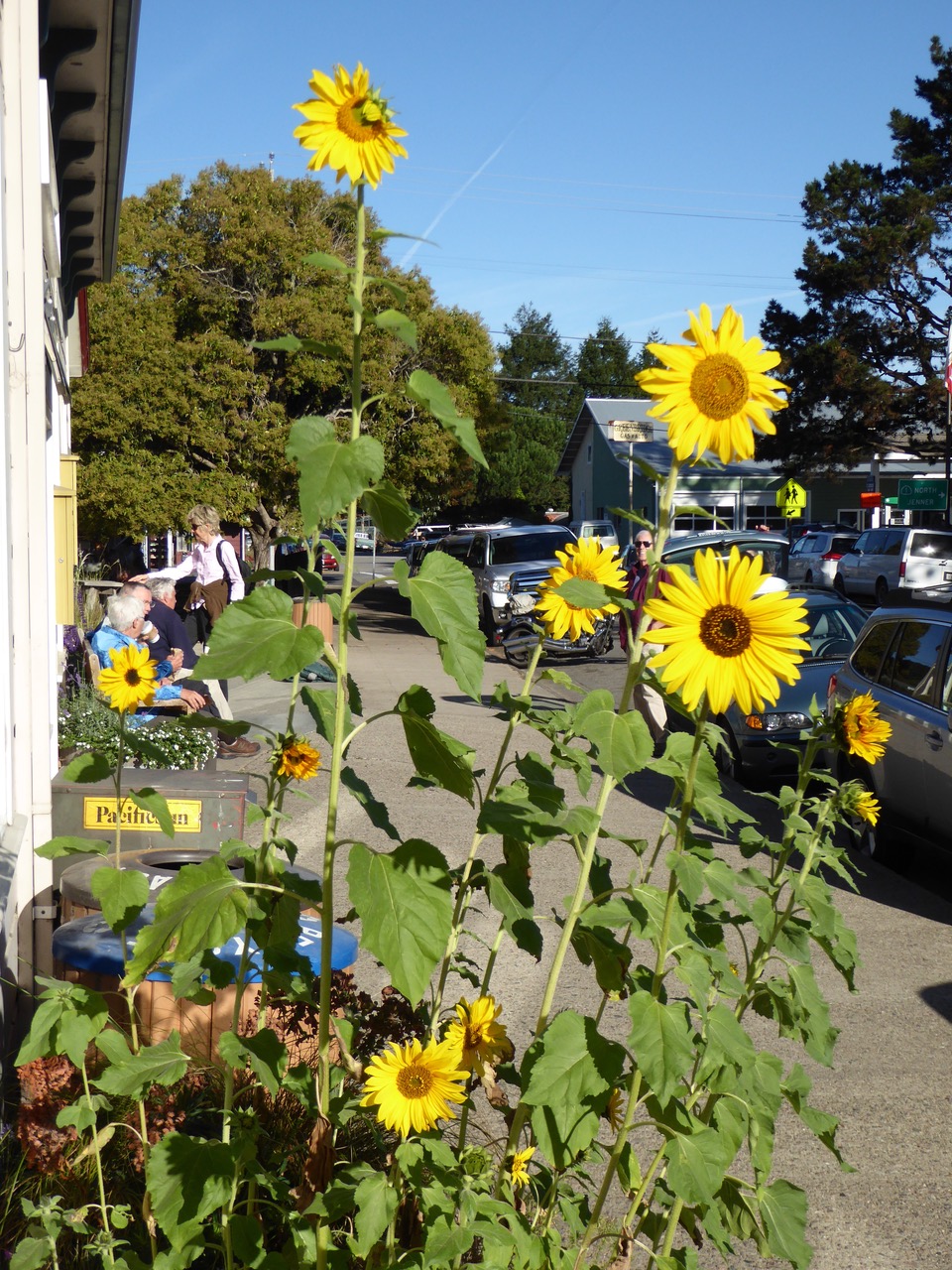