Chimney Rock at the end of the Pt. Reyes Peninsula was a timely destination for us last Monday with the spring wildflowers and the beach of Elephant Seals providing equal opportunity viewing. It’s been a destination for our hikes for many years each year providing new adventures like spotting the badger on the hill above Elephant Seal overlook with Michael in 2015. On an earlier hike with Armando we saw a lonely sea otter swimming by himself around Chimney Rock. After reconnoitering a small beach, he finally swam in and flopped down with some sleeping Elephant Seals on the beach for a little warm company. The views are always spectacular with the crashing waves on the rocky shore, the view practically to Japan well at least to the Farralone Islands. For those attentive to the waves there may be a female Gray whale with her baby swimming north. Sharp eyes and patience can win the day. Often we’ve been in the midst of a gale of fog and ocean winds thankful that we can layer up to keep warm. This past Monday by contrast was sunshine mild with only light winds to freshen the views.

Who would have known that geologists could wax eloquent but in the introduction to Pt. Reyes National Seashore in the helpful “Roadside Geology of Northern California” (Mountain Press Publishing Company, Missoula, Montana, 2016) the authors write: “Pt. Reyes Peninsula is an afterthought of tectonics, a scrap of granite dabbed at the last moment onto the coast of northern California. According to most geologists, it lurched at least 270 miles north along the San Andreas and San Gregorio faults. It is still moving. . . . the granite lies beneath sedimentary rocks. The oldest are sandstone and conglomerates of the Point Reyes Formation that cover the granite tip of the peninsula. They were laid down during the Paleocene time, about 60 million years ago, probably in deep water. Most of the others were deposited in shallow water between 5 and 20 million years ago, during the Miocene and the Pliocene time. They make up the long line of pale sea cliffs that face south across the sheltered waters of Drakes Bay.” P.155

In Geologic Trips San Francisco and the Bay Area, Ted Konigsmark adds this with a nice flourish as well: “The Pt. Reyes Peninsula is a piece of southern California that has been carried north by the San Andreas fault several hundred miles during the last 25 million years. As it moved north, the peninsula accumulated rocks from several different places in south and central California and carried these rocks with it, like a tramp steamer adding cargo to its deck.” P. 145
“The Point Reyes Headlands jut out southward into the Pacific from the Point Reyes Peninsula and intercept the full fury of the large Pacific waves. The headlands have survived this onslaught because they are made up of very hard granite and conglomerate. The granite is from the backbone of the headlands and the conglomerate caps the east and west tips of the headlands.” P. 152 http://www.geologictrips.com/sf/sfttprp.pdf

What’s in a name or what is the name? The Coast Miwok Indians lived on Pt. Reyes for thousands of years. An annual celebration near Pt. Reyes Headquarters is held each year to remember these centuries of habitation at the site called “Kule Loklo – Valley of the Bear”. In 1542 Juan Rodrigues Cabrillo sailed in the area and named it “Cabo de Pinos”. Later in 1579 Sir Francis Drake sailed into what became Drake’s Bay with his ship Golden Hinde and called it “Portus Novae Albionis” or Nova Albion, or Port of the New White Land or some say New England. In 1595, Sebastian Rodriguez Cermeno entered the horseshoe shaped bay and called it “Bahia Grande” and later “Bahia de San Francisco” (with the real San Francisco Bay fogged in and still to be discovered almost two centuries later by Gaspar de Portola in 1769). On January 6th 1603 Sebastian Vizcaino anchored his ship Capitan in what would become Drakes Bay on the Day of the Three Kings, Epiphany at the end of the 12 Days of Christmas and named it “Punta de los Reyes”. In 1836 the eastern and southern part of Pt. Reyes Seashore was a land grant for Mexican Army Colonel, Rafael Garcia, named “Rancho Tomales y Baulines”. Later in 1843, after the secularization of the Spanish Mission lands, the area came to be regarded as mostly unsuitable for cattle ranching and was known as “Punta del los Reyes Sobrante” with sobrante meaning left over. Its agricultural identity waxed at the hands of some enterprising lawyers from Vermont, the Shafter brothers, who established a “butter empire” there with 33 ranches on the peninsula in 1866. After that, the history of the area can be seen with the establishment of post offices in Olema 1859-1860, Bolinas 1863, Pt. Reyes (later becoming Pt. Reyes Station) in 1882 and Inverness in 1897. With another leap we arrive at September 13, 1962 when President John F. Kennedy signed the bill to authorize the acquisition of Point Reyes National Seashore.

Here’s a short Vimeo VIDEO of our hike with some fun music provided by Apple and a small post script ending at the old RCA Marine Receiving Station
with its parade of handsome, overarching Monterey Cypresses. New places and faces, I know, but got a dog in at last.

Jim talks to us about the virtues of cows walking over the land breaking up the hard surfaces and fertilizing, allowing plants to root and grow with a pat on the back or the bottom. Compost on rangelands by running cattle and in more organized scattering of finished compost materials on rangelands “could lock up gigatons of atmospheric carbon, preventing it from heating up the planet and contributing to such unpleasantness as prolonged drought, polar ice cap loss, seal level ride and ocean acidification.” The site for these studies was the Nicasio Native Grass Ranch. 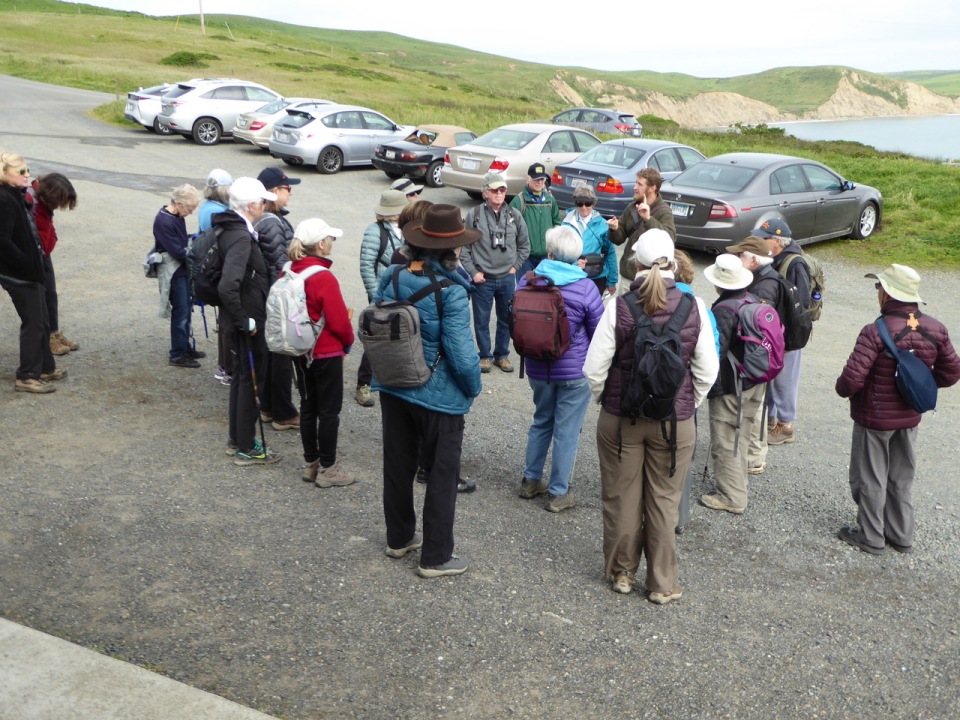 A large Monterey Cypress branch fell over the trail requiring a work around walk around.

Tufted Hair Grass (Deschampsia cespitosa) – from the remarkable study that Jim was involved with at Sonoma State University: “. . . a densely clumped native bunchgrass with narrow leaf blades that can reach 3 feet in height. Can be dominant or co-dominant in coastal bluff and terrace prairies and a single plant can live 30 years or more and produce over 500,000 seeds in one season . . . Tufted Hairgrass is one of two coastal grasses that are host
for the umber skipper (Poanes melane)” caterpillar and butterfly. (http://www.butterfliesandmoths.org/species/Poanes-melane) It “is one of the most important range forage species in the western United States.”
http://www.sonoma.edu/cei/prairie/prairie_desc/grasses_rushes_sedges.shtml#dece
http://www.sonoma.edu/cei/prairie/prairie_desc/index.shtml This is remarkable site with clear organization, rich detail without being overly burdened with high-end scientific language – a very approachable and fascinating array of information, great photo illustrations and even “Fun Facts” sections.

Cow Parsnip’s (Heracleum maximum) is a reference to their tall size “reaching to heights of over 2 meters (7ft). The genus name Heracleum (from “Hercules”) refers to the very large size of all parts of these plants. Cow Parsnip has the characteristic flower umbels of the carrot family. . .”
https://en.wikipedia.org/wiki/Heracleum_maximum
http://www.parksconservancy.org/conservation/plants-animals/native-plant-information/cow-parsnip.html?referrer=https://www.google.com/
https://www.youtube.com/watch?v=sysmrqw4sEo
The Pt. Reyes “Cliffs of Dover” in the distance are quite different in origin. The Drakes Beach exposures are composed of siltstones and mudstones whereas those of England are composed of chalk with streaks of black flint. https://en.wikipedia.org/wiki/White_Cliffs_of_Dover

Blooms along the way: INDIAN PAINTBRUSH (Castilleja Wightii or perhaps Castilleja franciscana?) in the Figwort Family. LilianMcHoul in her book “Wildflowers of Marin” writes: “Named in honor of Juan Castilleja, a Spanish Botanist. The specific name refers to an American Botanist.” I wonder how often two botanists get to ride together? “The plant is shrubby, sticky and hairy, one to two feet high.” Except out in the weather of Chimney Rock plants tend to more hunker down. “Like all Castillejas, the most colorful parts of the plant are the bracts, which are three-lobed and tipped with yellow.” P. 23 HAIRY PUSSY-EARS (Calochortus Tolmiei) in the Lily Family. “From the Greek words halos, beautiful and charts, grass . . . The specific name is in honor of W.T. Tolmie, surgeon of Fort Vancouver. The plant is four to sixteen inches high. The white or cream-colored flowers are very hairy on the inner surface, the lower petals with purple hairs and the upper with white. . . . It has on basal leaf that is longer than the stem.” P. 36 Reny Parker adds that the “flowers do indeed look like the ears of sleeping kittens.” P. 138 GOLD FIELDS (Lasthenia californica) in the Sunflower Family (Asteraceae). Parker writes in her “Wildflowers of Northern California’s Wine Country . .” .. extensive blankets of gold covering many coastal bluffs and open fields from March to May. Upon closer inspection the covering is constructed of thousands of tiny yellow rayed flowers.” P. 87 and COW PARSNIP (Heracleum maximum) in the Parsley Family. “The white flowers are in flattish compound umbels.” P. 56 McHoul 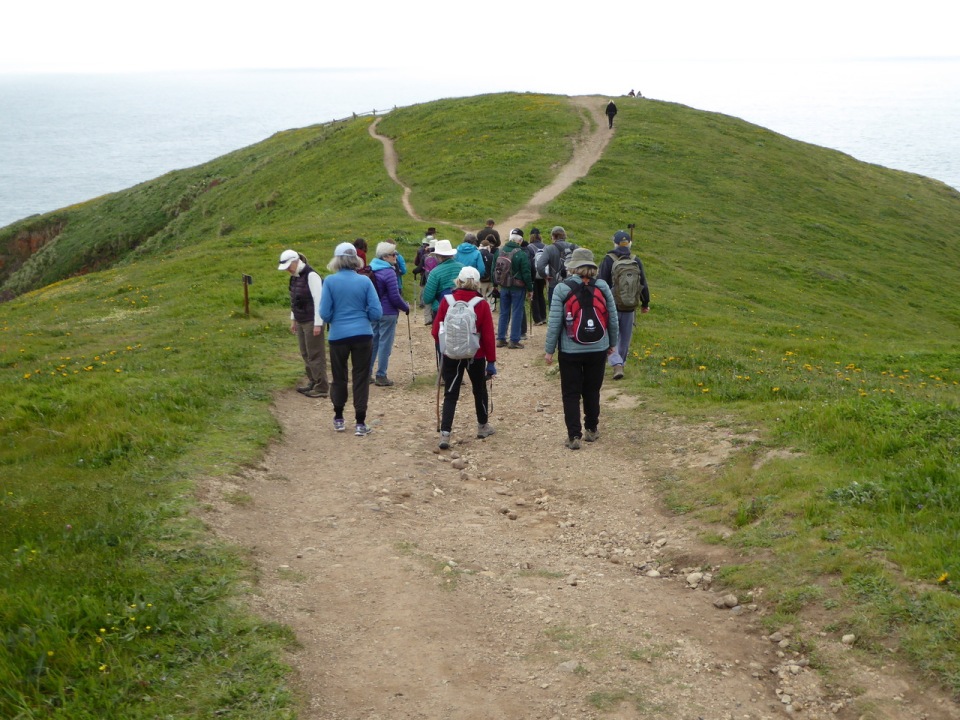 Arriving at the cliff edge we are looking down on a seamount (or maybe better rocky outcrop unless seamounts come in many sizes) (or is it bird poop rock?) just off the coast that some identify as Chimney Rock but perhaps there are other candidates – for sure we’re on the Chimney Rock Peninsula! There was more nesting activity last visit but maybe we’re just earlier on the scene.
https://www.yelp.com/biz_photos/chimney-rock-point-reyes-national-seashore-point-reyes-sta

Some adjacent rocks along the shore provide a brief VIDEO meditation complete with the sound of wind and waves:

Not quite “Picnic at Hanging Rock” but picnic none-the-less feasting on the food and the view.

We join a young family at their picnic with their hikers of the future “in training”.

Jim spies a Peregrine Falcon perching on the cliffside and in no hurry to swoop away. David Allen Sibley writes “This sleek, powerful falcon has long been considered the embodiment of speed and power. Found in open areas, it hunts mainly medium sized birds from high above in spectacular swoops.” P.133

David Lukas (with whom we’ve hiked) writes in his BAY AREA BIRDS: “Thanks in large part to stringent legal protection and herculean efforts to breed these birds in captivity and release them back in the wild, Peregrine Falcones have made a stunning comeback from the perilous lows they reached in the 1960s due to DDT contamination. . . . These beautiful and powerful birds are among the world’s most impressive avian predators. Much has been made of their ability to dive at more than 200 mph, but just as impressive and far more easily observed is their ability to take off after fast-flying birds in an all-out pursuit that is thrilling to watch. These falcons are master aerialists, and they seem to hunt and play for the sheer pleasure of the chase . . .”
P. 80

Looking out for whales passing by we come up with a passing container ship and wish for the times of tall ships on the bounding main.
http://www.ocean-institute.org/tall-ships-festival and if you are an aficionado https://en.wikipedia.org/wiki/Tall_ship 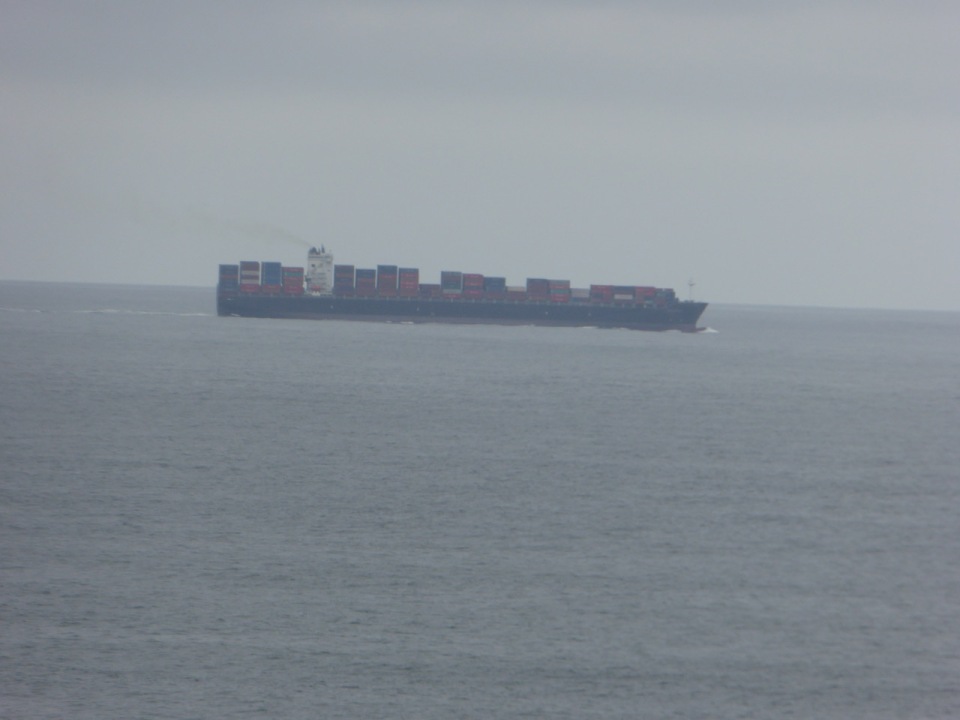 Returning we come by the the Point Reyes Lifeboat Station with a storied history. A few smaller Elephant seals have found a quiet haven on the small beach.
https://www.nps.gov/pore/learn/historyculture/people_maritime_lifeboatstation.htm 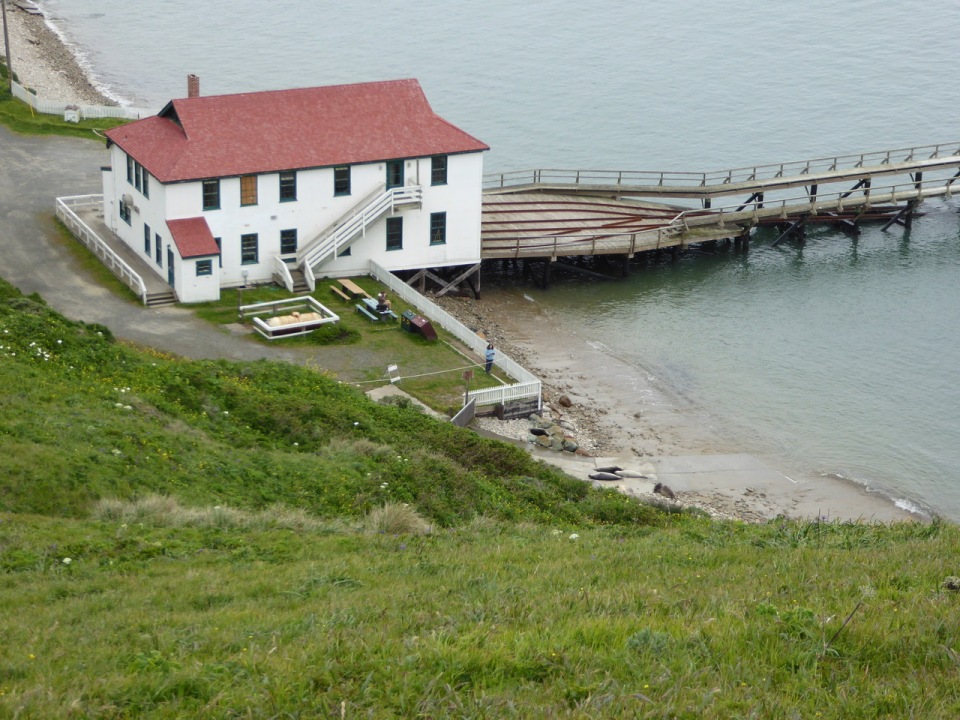 And sometimes the “surfmen” themselves drowned on their mission to save “those in peril on the sea”. The Historic Live-Saving Service Cemetery writes large that we are a nation of immigrants. https://www.nps.gov/pore/planyourvisit/events_memorialday.htm

Jim saved the Elephant Seal Overlook until last at a more approachable time with so many other hikers on the trail with us on Monday.
We looked up on the hill to see if the badgers which we saw with Michael in 2015 might be about but the lush grasses covered their turf and no one spotted them this year. But the Elephant seals were there in abundance, they had recolonized Point Reyes in 1981 after an absence of 150 years. 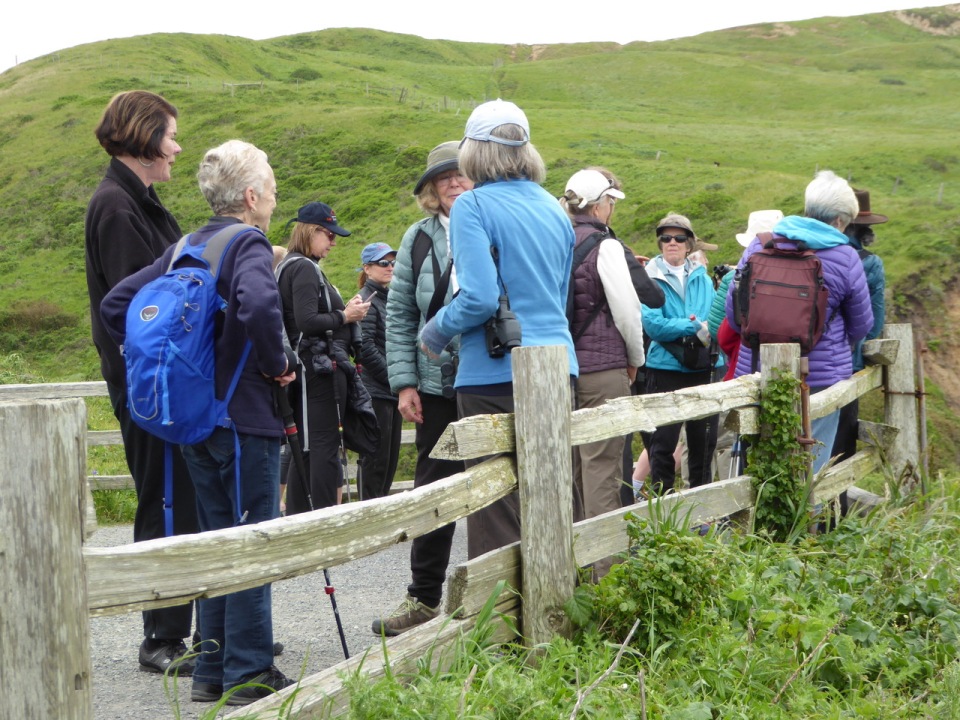 What is their sleep number?

Here’s a VIDEO of a young male Elephant Seal that I took a couple of years ago, it was included in a previous hike-log.
https://vimeo.com/126559495 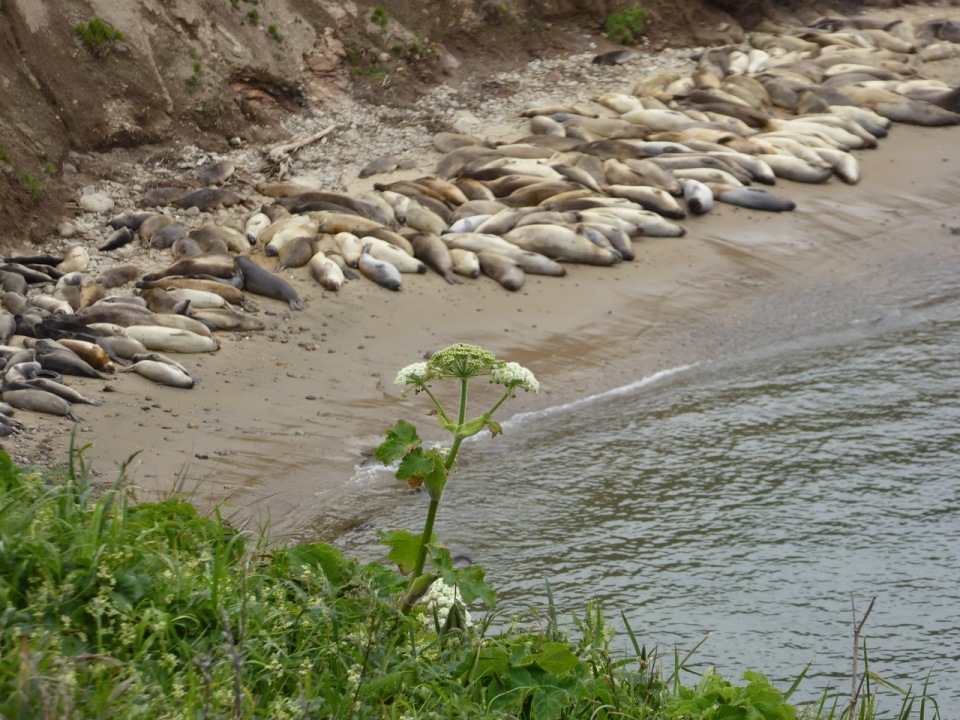 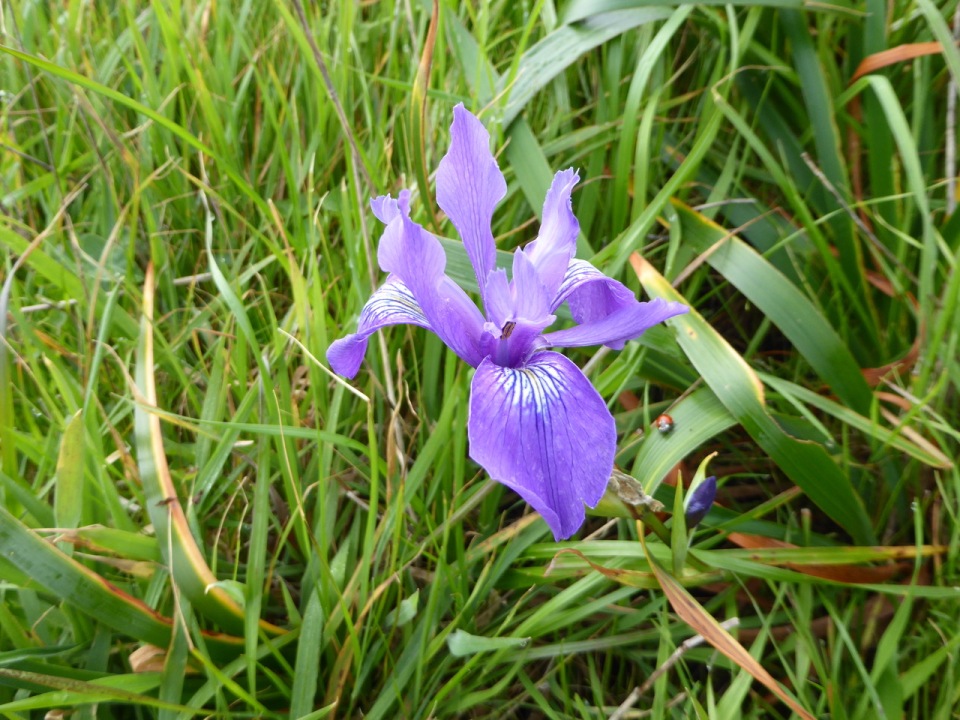