The ever narrowing road gave us an early taste of this “mountain eyrie” situated between 1350 and 2300 feet (411-701 meters) on Sonoma Mountain. Fairfield Osborn Preserve is located on 450 acres of dramatic countryside that could easily qualify as “the land that time forgot.” In fact, as we walked along next to a burbling brook with a lovely overlay of birdsongs it seemed to be setting the scene for a kind of Jurassic or better, Late Cretaceous experience. (Jurassic does seems to have more zing.) It was an idyllic moment along the trail in a verdant riparian woodland that seemed to be waiting for the crash of trees as a T. Rex approaches or even more disarming the soft movement of leaves ahead that might presage the presence of stalking velociraptors. Imagine seeing the avian image below, there’s an obscuring fog as night sets in. Maybe you can just spot this foot in the gathering darkness, it’s slippery on the path and hard to get a purchase in all this mud.

Claudia Luke met us as we arrived and described the mission of Fairfield Osborn Preserve. Dr. Luke is the director of Sonoma State University’s Center for Environmental Inquiry and oversees activities at SSU’s three nature preserves: Fairfield Osborn, Los Guillicos and Galbreath Wildlands. She emphasized that we are facing enormous and intense environmental challenges. To approach these we need to develop ongoing conversations mingling various areas: education, the arts, economic, business, medical, governmental and others. In setting up the new program at Sonoma State they found that students were spending 65 hours a week with digital media at the expense of actual time in nature. The goal is to have students involved in real world projects and to have lots of outdoor, hands-on experience to combat this “Nature Deficit Disorder”. It is not only brain storming with various parts of society but also the most basic – communication with the natural world for ourselves.
https://vimeo.com/214215060 Here’s a Vimeo video of Dr. Luke’s talk to us last Monday.

Later on we came across this plaque along the trail, it was so much better placed out here along our pathway than adjacent to some buildings or as part of a parking lot. The Nature Conservancy is a great facilitator for preservation of natural areas, we found them to be pivotal on another hike we took – Ring Mountain in Tiburon. The Roths, Joan and William H. bought this property on Sonoma Mountain “around 1950” and gave it to the Nature Conservancy in 1969. The Nature Conservancy in turn donated it to Sonoma State University “maintaining a conservation easement over the property for educational , research and conservation.” An additional 190 acre donation by the Roths is managed under an easement with the Sonoma County Agricultural Preservation and Open Space district. “TNC recognized several natural resources of conservation value on Preserve lands, including the protection of Copeland Creek, one of the few fishless perennial creeks in California.” http://www.sonoma.edu/cei/osborn/about.html

https://www.nytimes.com/2014/06/16/business/william-m-roth-shipping-heir-who-became-lifelong-public-servant-dies-at-97.html?_r=0 Remarkable biography
https://www.sonoma.edu/cei/documents/osborndata/fop_transcript_roth_joan.pdf An interview with Joan Roth on April 5, 2013 – very fresh and forthright. In one response she describes going to the then one restaurant in Glen Ellen for an early dinner (in the 50s?) riding on horseback over Sonoma Mountain to get there and then riding back. “She briefly mentioned how appalled she was at the information about him (her father Fairfield Osborn) in Wikipedia, especially the claim that he was interested in eugenics. Joan mentioned his time as Captain in an all black group during World War 1 and his desire to separate himself from his father, Henry Fairfield Osborn. According to Joan, her father dropped the name ‘Henry’ and went by Fairfield Osborn.
https://sites.google.com/site/newyorkcityapril1946/in-progress/newspapers/the-sunday-papers-on-april-14/the-sunday-times/the-main-news-section/city-events/society-news/weddings-and-engagements Lovely account of the Roth’s marriage in 1946.

http://www.anb.org/articles/13/13-01245.html Brief biography of Fairfield Osborn – In her Oral history interview Joan Roth said, “Fairfield Osborn was really influential in going around Africa and setting up preserves, conservatories and establishing the importance of the animal wildlife there.” https://en.wikipedia.org/wiki/Henry_Fairfield_Osborn_Jr.
In reading about Henry Fairfield Osborn Sr. (b. 1857) and Henry Fairfield Osborn Jr. (b. 1887) it seemed all too easy to superimpose the one biography on the other. I can see why Fairfield Osborn wanted to separate himself from his father’s history and use Fairfield Osborn as his name. John Muir was introduced to Osborn Sr. in an East Coast visit in 1893 at Osborn’s Castle Rock home along the Hudson. Muir continued his contacts in 1896, 1898 and took the Osborn family to Yosemite in 1910. In 1911 he spent time at Osborn’s editing the final proofs of “the Yosemite”. It would be intriguing to learn what Fairfield Osborn’s experience was in meeting him during some of these visits starting when he was 6 years old . http://vault.sierraclub.org/john_muir_exhibit/people/osborn.aspx

http://www.newyorker.com/news/news-desk/environmentalisms-racist-history In this arresting article now more appropriate than at the time of its August 2015 publication, Jedediah Purdy describes a mixed bag in environmentalist history. It might be easy to dismiss this early extremism in the conservation movement with cliche rationalizations, “that was then, this is now” or “don’t throw out the baby with the bath” but with our current great political leap backward, it is sadly and powerfully timely.

Claudia pointed out early signatures of people who had lived on this land. Above the familiar rock wall boundary markers now softened by mosses & lichens and below the remains of a cabin underneath an old Monterey Cypress.

Michael wanting to interject a comment makes himself just a little taller on tip toes.

Some False Solomon’s Seal along the trail http://identifythatplant.com/false-and-true-solomons-seal/ I always think that the “false” designation
some how communicates that we shouldn’t take the plant seriously, how about Solomon’s Other Seal!
Some turkey egg shells looking more destroyed than pecked out – All About Birds has some surprising history https://www.allaboutbirds.org/guide/wild_turkey/lifehistorys
Soap Root plants were prolific along our way. Here’s an excellent article in Bay Nature: https://baynature.org/article/versatile-bulb-many-uses-soaproot/
And calling on Bay Nature once again as we pass some grayish white lichens on a rock: https://baynature.org/article/lichens/

Here Rowena who has been a hospice nurse is making a short video for one of her patients who is unable to get out into nature.

Copeland Creek starts “slightly above Fairfield Osborn Preserve on the lower slopes of Sonoma Mountain. Upon reaching the valley floor Copeland Creek bisects the campus of Sonoma State University on its journey into the Laguna de Santa Rosa.” It becomes part of the Russian River basin and in turn part of the Pacific Ocean. https://en.wikipedia.org/wiki/Copeland_Creek

We looped an area called “Turtle Pond” covered with duckweed https://commons.wikimedia.org/wiki/File:Turtlepondfob.jpg and continued down the muddiest trail that we’ve had the pleasure to hike. Trousers are tucked into socks to disadvantage any ticks along the way.

Michael spies an American Bullfrog and captures him bare handed with a low, stealthy approach. https://aqua.org/explore/animals/american-bullfrog They are a ferocious predator and Claudia mentioned that they eat small turtles among other things. Michael seems to be in the midst an interspecies conversation. 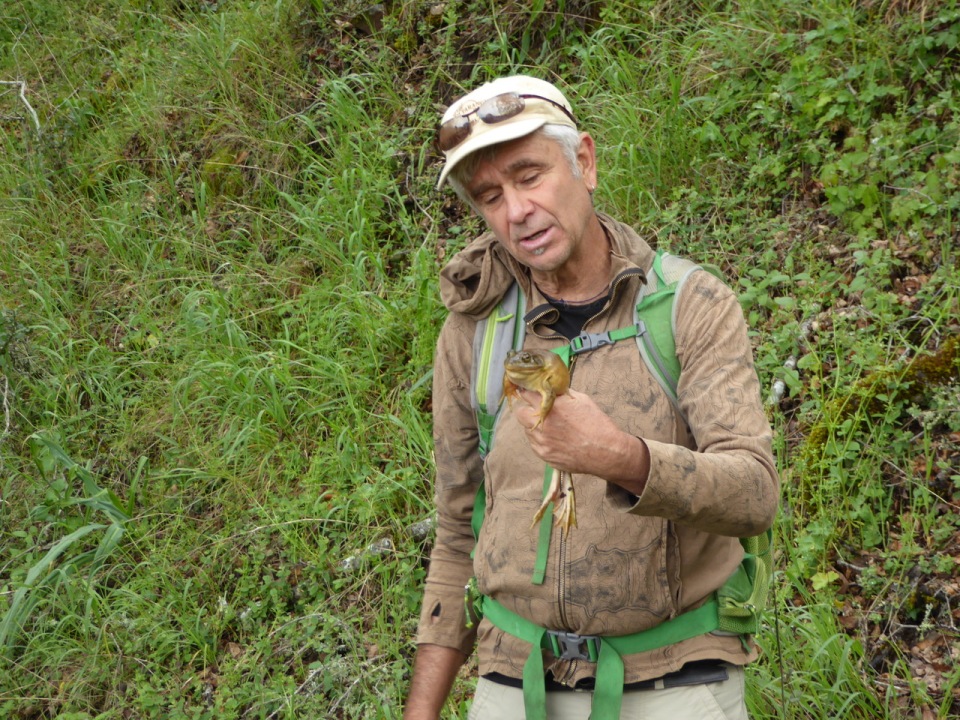 Since this was our first fauna closeup on the hike there was a lot of interest and excitement.

Adding to the magic of the day, the fog descended on us for a time transforming the landscape with a gauzy blur.

We learned about “slumps” – the geological kind. While ours is less dramatic perhaps than some, it is a slump nonetheless.
http://www.geologyin.com/2015/02/types-of-wasting-slump-rockslide-debris.html
Passing a pond on the right, Claudia talked about the kind of decisions that needed to be made as the pond silts in . . . do you let this happen? do you bull doze it out to maintain the life for rails and other water birds? How much “management” is needed to maintain the “preserve”?
Here’s a project to minimize erosion around the creek near the parking lot. And the array of solar panels powers Fairfield Osborn Preserve. This is only a small part of solarization at Sonoma State University. “The Solar Power Monitoring System project for SSU’s Fairfield Osborn Preserve . . was collaborative between SSU field Stations & Nature Preserves and senior thesis students in the Department of Engineering.” http://www.sonoma.edu/pubs/solar/
The fourth photo also shows the weather station above the solar array. http://faridfarahmandresearch.blogspot.com/2011/06/solar-powered-wireless-weather-station.html 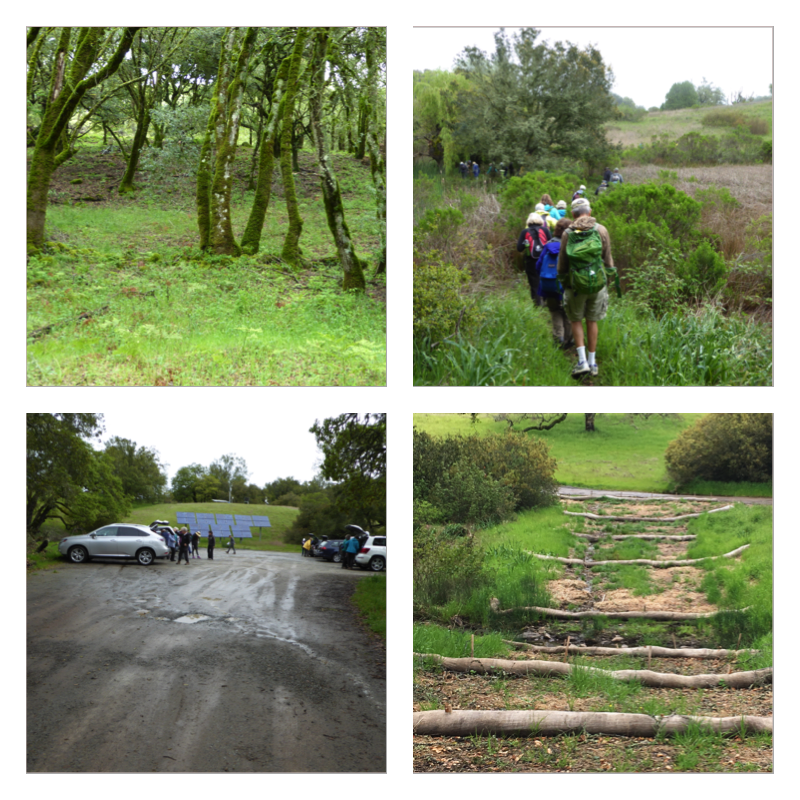 Harriet shows us what the stylishly dressed muddy person might wear for lunch.

Michael has just returned from an epochal family trip to Oakridge, TN. to be with his mother at the time of her death. He generously shared some of this experience including discovery of family members previously unknown and many family mysteries beginning to be revealed. There was rapt attention and I think it was Rowena who said, “This is better than HILLBILLY ELEGY! 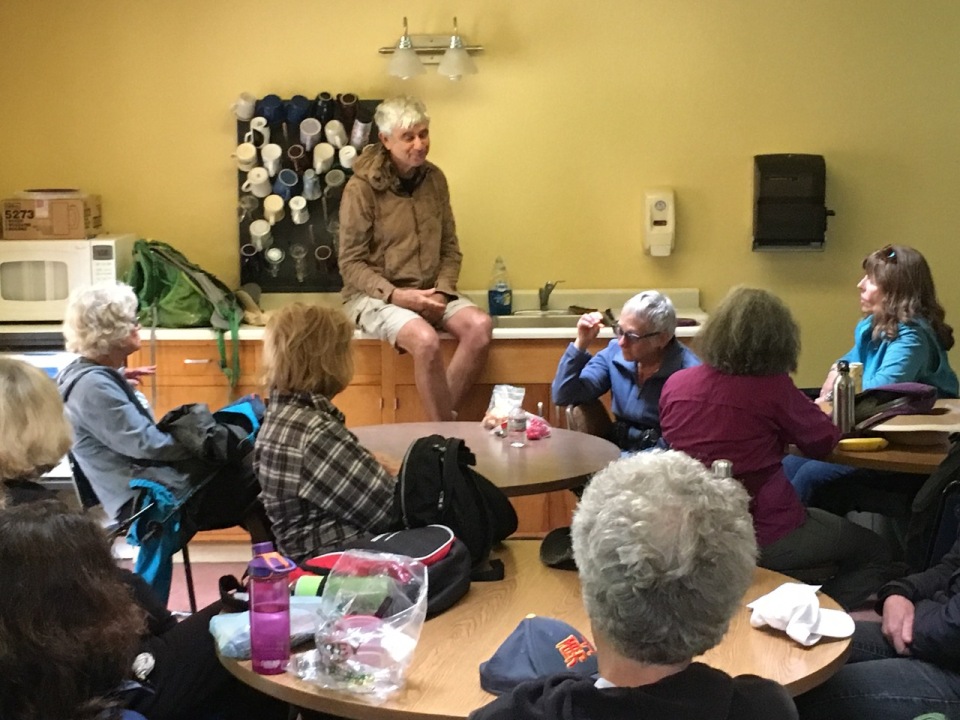