This week’s hike high on Mt. Tamalpais couldn’t have been more different from last week’s at Green Gulch Farm. Bright sunshine and fair winds greeted us at Rock Spring parking area. Instead of rain parkas and umbrellas, it was time for sunscreen and wide-brimmed hats. It was almost shorts weather. The undulating hills of Marin County spread out before us as we looked south – just the distant profile of San Francisco etched in the morning fog. The pathway to the top of this view point was lined with cheering Bicolored Lupine and California Poppies bobbing and blowing in the breezes. Their enthusiasm was hard to miss and happily contagious.

Adding to the excitement, we were able to see our friend and one of our esteemed hike leaders, Armando Quintero, after a hiatus of . . . was the last time 13 May 2013? Mando was in fine feather as he shared some of the moments of his life since we last walked and talked together.
Maybe we recall that chilly moment at the Pt. Reyes Lighthouse with the Gray whale skull that Mando had reclaimed from a beach at Vandenberg Air Base while he was a naturalist at Pt. Reyes National Seashore.
Perhaps it was the hike at Port Costa when he pointed out the tiny mouse bones in some owl scat.
You’ll recall his story of sleeping in John Muir’s bed a bit restlessly when he was working at the John Muir National Historic Site in Martinez.
Or maybe it’s the hike along the shore of Briones Reservoir when he brought along his then teenagers, Lily and Bella. Now Lily is an obstetric nurse in Seattle and Bella is about to graduate from the University of California, Santa Cruz.
Many other happy memories crowd in as we gather for our hike today.

Our hike into history was focused on the West Peak of Mt. Tam which was the highest point on the mountain until it was bulldozed for a national defense installation at the start of the cold war. Now it barely holds that altitude record. Gary Yost whose creative work we’ve appreciated in previous hike-logs has a superb film on the West Peak called THE INVISIBLE PEAK. https://vimeo.com/garyyost/invisiblepeak?ref=em-v-share

Armando emphasized that the mission to restore the West Peak is a remarkable collaborative effort joining a variety of government entities each sharing in the process and contributing to this goal. ONE TAM through the Tamalpais Land Cooperative (TLC) not only seeks to fulfill this goal but to evaluate and meet the challenges of maintaining the health and vigor of the entire Mt. Tamalpais ecosystem. The mission is not only to have government commitment but also to welcome NGOs coordinating wide community support and volunteers. “ . . . Mt. Tam has been protected for 100 years. And it’s through ONE TAM that we can protect it for 100 more.” http://www.onetam.org/

Originally the West Peak was over 2.600 feet (792 m) before being “flattened for radar dome construction”. Today after these alterations it is 2,576 feet (785 m). https://en.wikipedia.org/wiki/Mount_Tamalpais

The East Peak is the mountain’s second highest peak at 2,572 feet (784 m) though it appears the taller of the two from many directions. It was from this peak that another of Gary Yost’s splendid films was shot – “A Day in the Life of a Fire Lookout”.
https://vimeo.com/48169212) 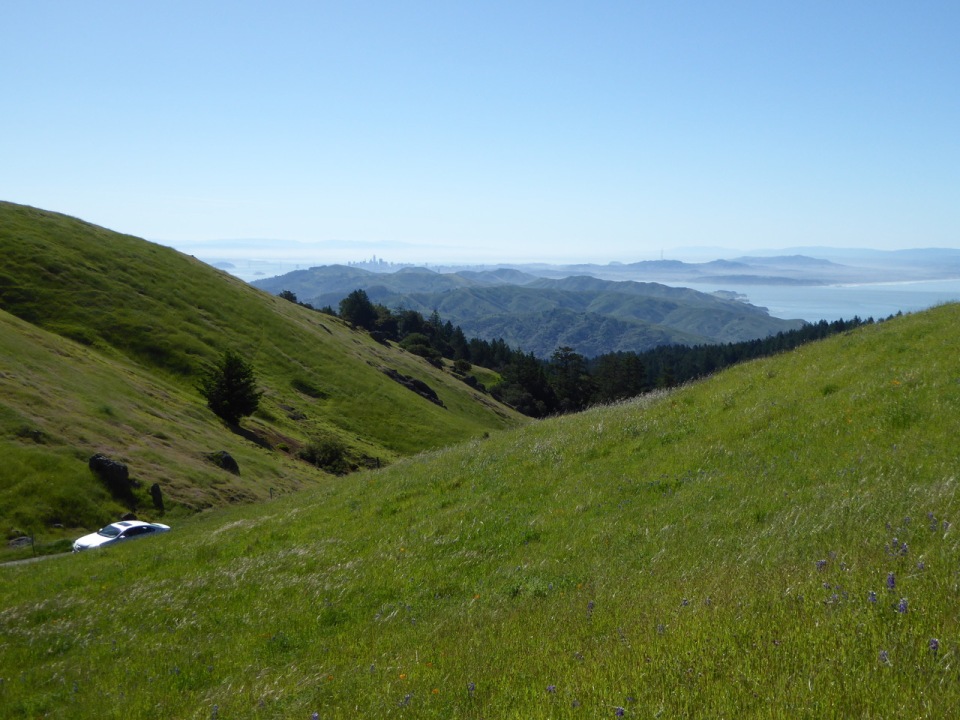 Rock Spring parking area is a favorite destination with a number of trail directions all around the compass. We come in for a landing on a Monday morning. Mando keeps bees as well as chickens. He is describing how he got stung by some angry female worker bees during an unplanned moment.

Ed and Armando (wearing the hat) – Mando wears a number of hats. He’s the Executive Director of the Sierra Nevada Research Institute at UC Merced and a California Water Commissioner. http://ucwater.org/person/armandoquintero Should you google Armando Quintero, he’s the water one.

Another way of going up the mountain and – – – – coming down. Roadie biking – http://bestrides.org/mt-tamalpais/ and then there’s Mountain Biking.

Exchange on the trail, Armando is talking about a mosquito swarm he encountered that wasn’t attacking. It responded moving up and down to his low vocal sounds as if he was conducting their flight. http://www.biodiversitylibrary.org/content/part/JAMCA/JAMCA_V02_N4_P507-510.pdf

Then he went on to talk about what the baby in the womb hears and why babies seem to initially resemble their fathers. This could be a protective adaptation in the animal kingdom but with humankind it is under discussion. https://biology.stackexchange.com/questions/34691/do-babies-resemble-their-father 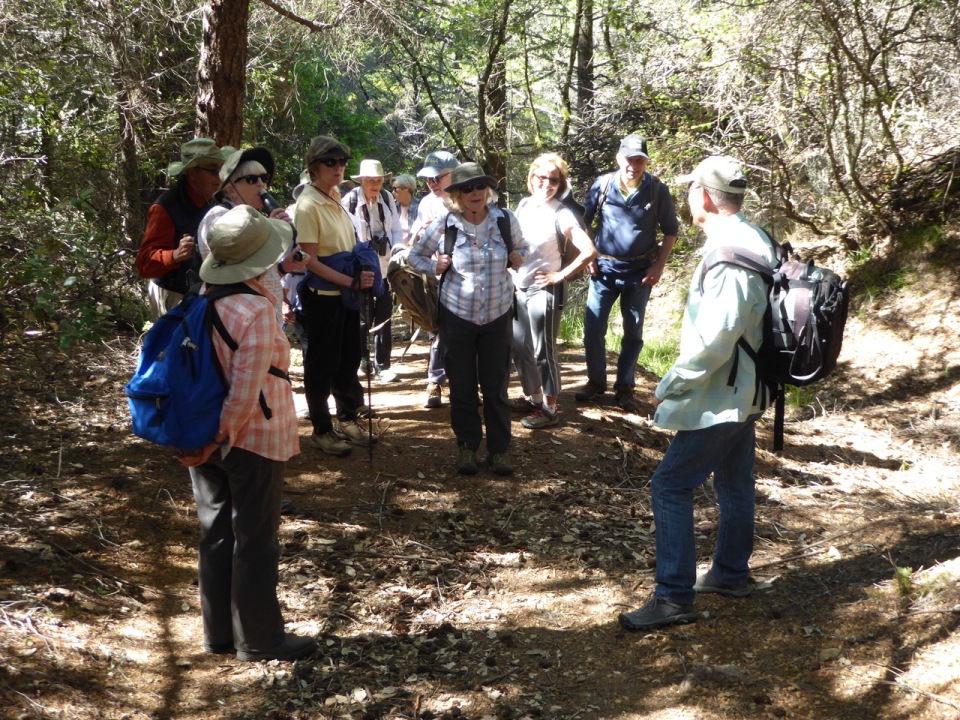 Some of the 50s archaeology on the West Peak. Here is an excellent aerial photo of the newly constructed Mill Valley Air Force Station, there were various iterations so I’m not sure if this was at the activation of the 666th Aircraft Control and Warning Squadron on January 1, 1951. The map at the end of this link shows the expanded site in 1979 with various buildings identified. http://www.militarymuseum.org/MillValleyAFS.html
https://en.wikipedia.org/wiki/Ground_Equipment_Facility_J-33 This link describes some of the changes with the various electronic improvements and it freely uses a variety of CAPITAL/NUMBER combinations – “acronyms” of military design. Knowing “militarese” would help in understanding.
http://www.dtic.mil/whs/directives/corres/writing/Writing_Style_Guide.pdf

The West Peak area was marked with a cairn and plaque dedicated to its members “who gave their services to our country during the Great War A.D. 1919” by the California Alpine Club http://readtheplaque.com/plaque/alpine-club-wwi-memorial Sadly, the cairn was bulldozed in 1950 to build the Mt. Tamalpais Air Force Station. Read about the California Alpine Club’s history on their fascinating website entry by Verna Steele West. http://www.californiaalpineclub.org/cac-history/

By the way, Armand (not Armando) seems to be carrying a large metal object but that piping is attached to the site, not Armand. 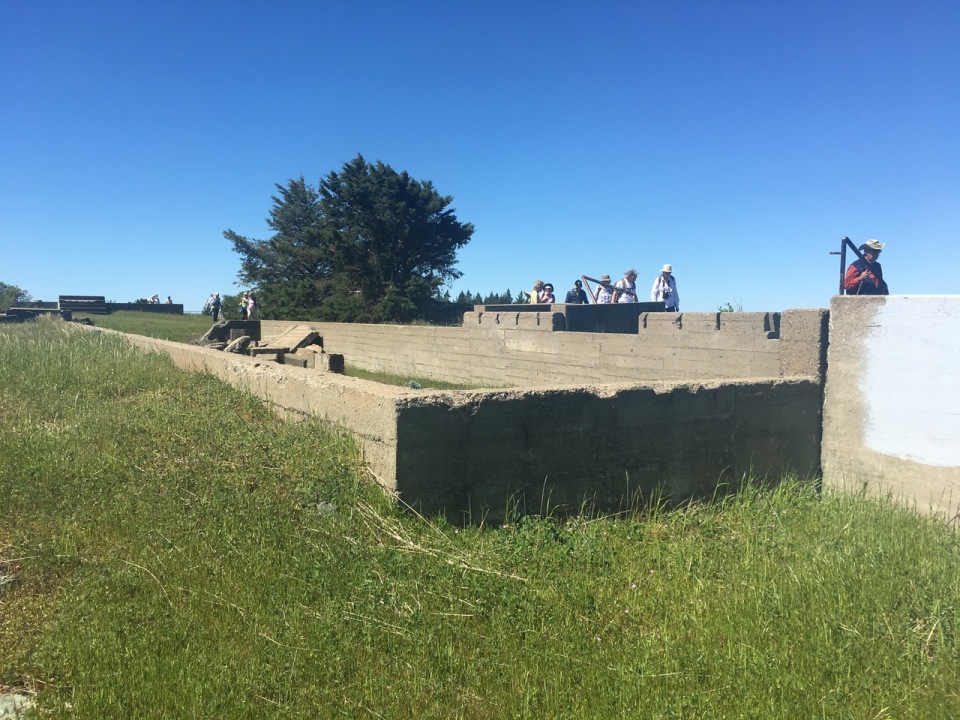 Looking down on some housing pads for married officers and perhaps, airmen. Here is a lovely and fascinating recollection by Lisa and Madelyn Byrne who lived at the Air Force Station from 1957 – 1959. This is a rare time capsule. The furthest pad next to the red rock hill was the site of their home – of Lt. Col and Mrs. John Byrne and their six daughters. https://www.mvhistory.org/growing-up-on-the-west-peak-of-mt-tamalpais-interview-with-lisa-and-madelyn-byrne/

https://vimeo.com/126699268 (A little over half an hour but well worth the time)
The film was done by the venerable Gary Yost in 2015. Note to Michael in Bhutan, this film contains HULA HOOPING!

On a previous West Peak hike with Mando on 13 May 2013, he showed us some the USAF facility buildings from the time.

Serpentine underpinnings for part of the Mill Valley Air Force Station. “…the California Legislature specified that serpentine was ’the official State Rock and lithologic emblem’.” https://en.wikipedia.org/wiki/Serpentinite

We always love to find a picnic spot with a view and today we weren’t disappointed. 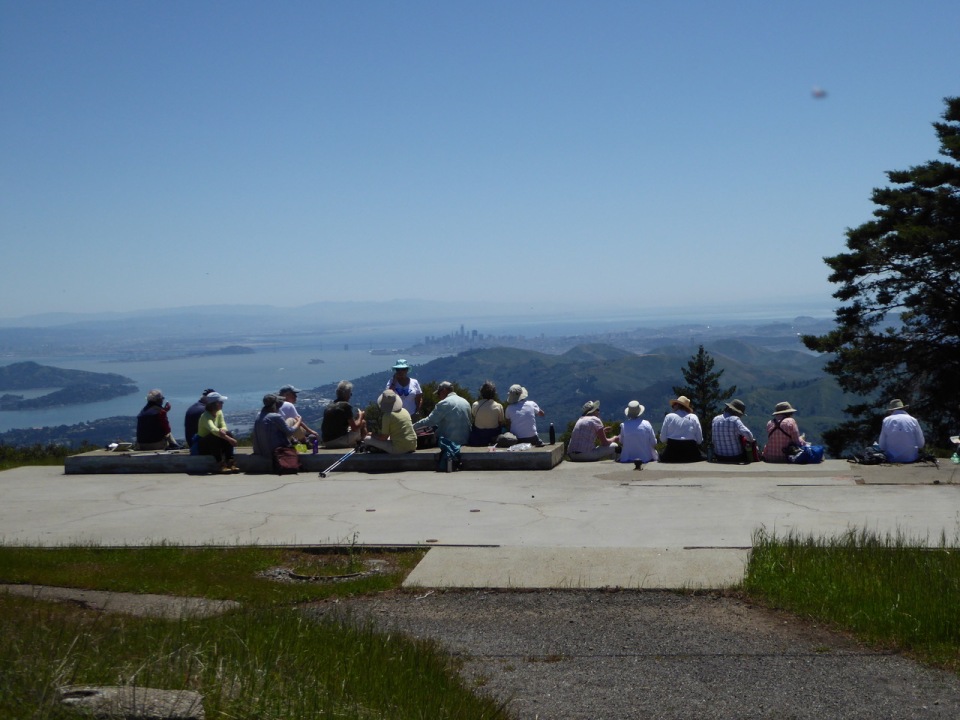 The classic Rambler’s Guide to the Trails of Mt. Tamalpais and Marin Headlands and some new ink, a Redwood Tree that Mando shared after lunch. He has long had a special bond with Sequoia and King’s Canyon National Parks starting with working there on one of his park ranger assignments. You’ll recall his story of meeting Janet Yellen on the trail in that area. Soon all of our hike leaders will need ink, Don next? Jim?
http://www.ucmerced.edu/news/2015/sierra-nevada-research-institute-names-new-executive-director Jeannie who does such a fabulous job organizing and updating the hike information each series for us, iPhone in hand keeping in touch with us and the world. 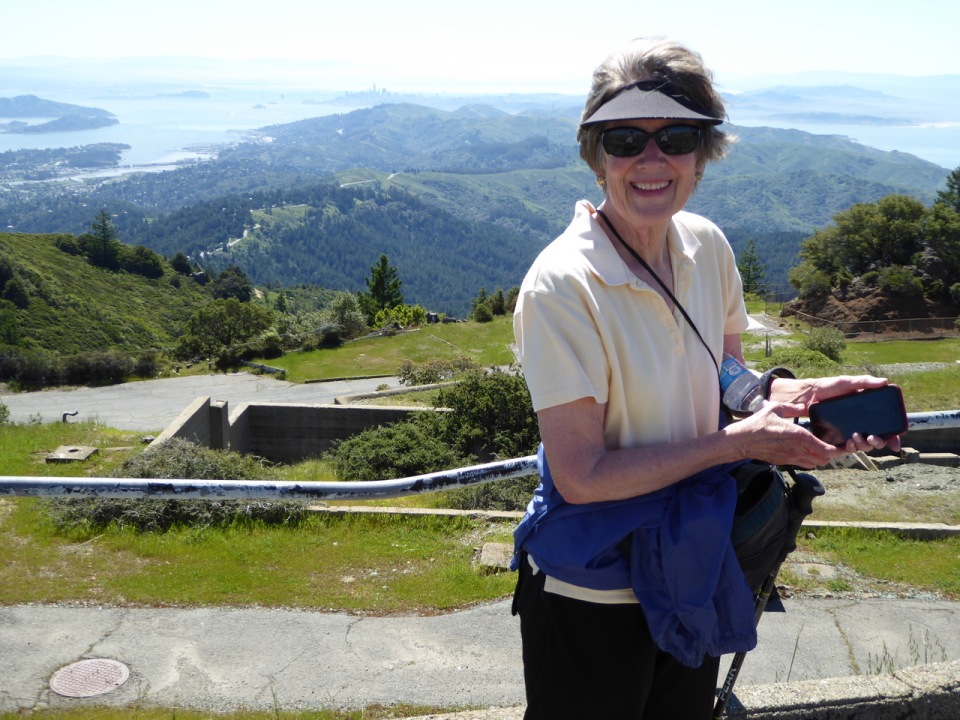 Heading back down the Mountain with one “Radar Dome” (FAA-owned radar antenna protected by a “golf ball” radome) still at work on the horizon. 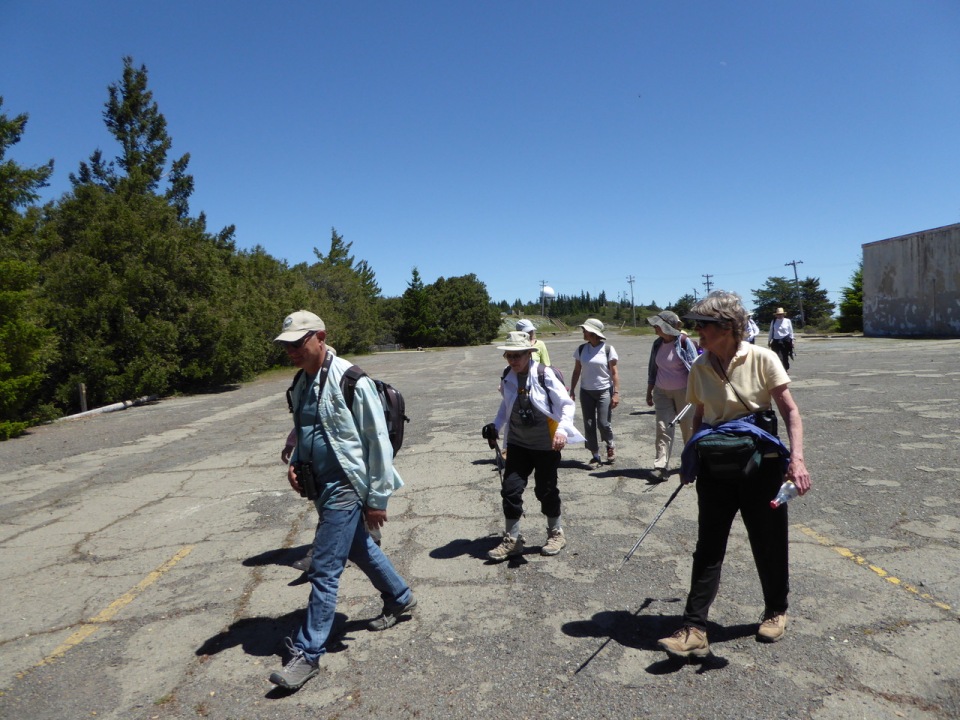 Barb and Scott as we return back to Rock Spring parking area. Barb is a retired nurse practitioner and Scott is a retired engineer. He is a board member and webmaster for San Francisco Amateur Astronomers. http://www.sfaa-astronomy.org/ http://www.sfaa-astronomy.org/wp-content/uploads/2017/05/2017-05.pdf If you scroll down you’ll see a West Peak Hike with the SFAA on Saturday, 13 May from 10 AM-1:30 PM with film maker Gary Yost and Marin Municipal Water District ranger Matt Cerkel. They will lead a hike from the Mountain Theater overflow parking lot. 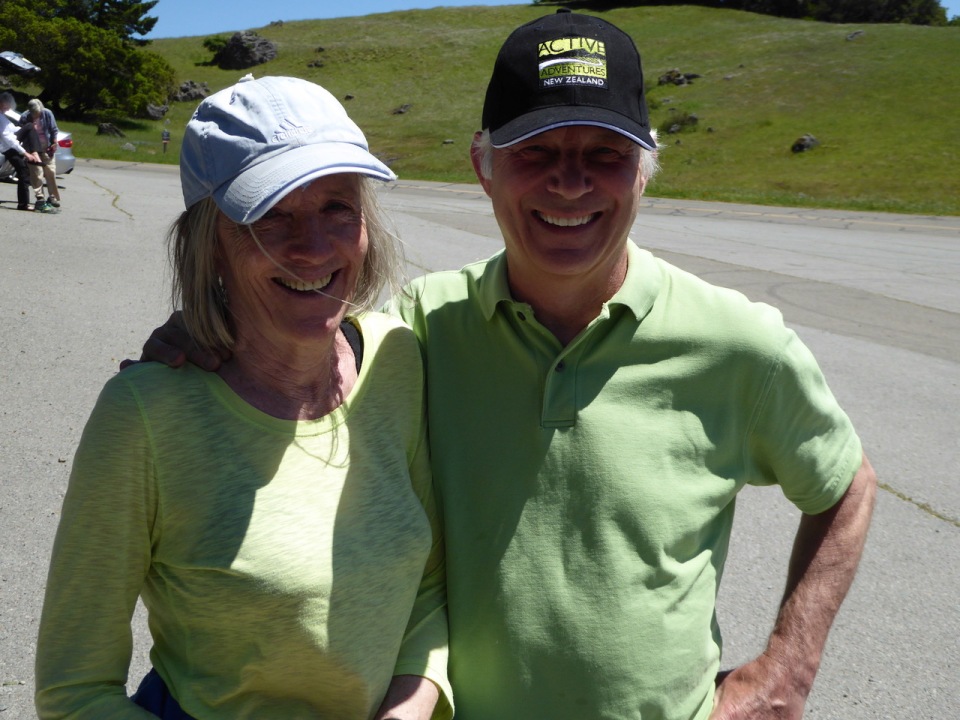 A shady catching our breath and it’s a wrap. Next time we meet with Don McLaurin, a San Francisco City Guide, on a Haight-Ashbury/Buena Vista Park tour.

P.S. There is a remarkable amount of additional material but it can be enjoyed at your leisure, I know, what’s that?