California State Route 1 is a wonderful, variegated gem of a highway winding its way along California’s West Coast. It travels up from Capistrano Beach at Dana Point in Orange County to where it joins Rt. 101 just outside Leggett in Mendocino County after passing through “rugged redwood-forested, mountainous terrain”. Like a foreign operative with many passports, it has many names as it makes its way up the coast: Pacific Coast Highway (PCH), Cabrillo Highway, Shoreline Highway, Coast Highway, or Blue Star Memorial Highway in recognition of those in the Armed Forces and along many other local names as it passes through various areas.

A beautiful children’s book Pat (and I sometimes) used to read to our classes was called, “What Good Luck, What Bad Luck” by Remy Charlip featuring various disasters that were intervened with happy outcomes only to be met with a new disaster. http://www.vintagechildrensbooksmykidloves.com/2008/09/what-good-luck-what-bad-luck.html Our hike last Monday was one of those “disasters” turned into a sparkling opportunity and we hope, not the sequel to the book’s sequence. Can you have a sequel to a sequence? The “disasters” were the mudslides and the various under minings of highway 1 resulting in its closure. The good luck part was our being able to hike the Shoreline Highway from Stinson Beach to the Steep Ravine area and back. There were a few cars allowed for local travel, some Cal Trans workers with their white hard hats & distinctive orange trucks and the occasional biker pumping or zinging by. Other than that, the road was ours with the blue Pacific extending to a sparkling infinity on our right and the variegated yellow/orange/reds of the exposed hillsides to our left.

Memories of “Detour (There’s a Muddy Road ahead) by Paul Westmoreland echo with our footsteps: “Detour, there’s a muddy road ahead. Detour, paid no mind to what it said. Detour, all these bitter things I find. Should have read that detour sign.” Wiki calls it a Western swing ballad with “The original version performed by Jimmy Walker with Paul Westmoreland and His Pecos River Boys, issued around the beginning of November 1945.” The singer shares he’s spent five years in jail and shoulda read that “Detour” sign but now he’s out and able lament at his leisure. http://www.ceder.net/recorddb/lyrics_viewsingle.php?LyricsId=345&menu=0

Enter Robert Frost with “The Road Not Taken” bringing up opportunities and choices we make in our lives, the decisions for going one way and then the wonderings. “What if we had we chosen that other path?” Of course, we’ve done this in our personal lives and these days we also have these thoughts tumble in on us with our national persona.

Katherine Robinson gives a splendid description and explanation of the poem in Frost’s context. She writes that he actually wrote it as a joke for his poet friend Edward Thomas. “When they went walking together, Thomas was chronically indecisive about which road they ought to take and – in retrospect – often lamented that they should , in fact, have taken the other one. Soon after writing this poem in 1915, Frost griped to Thomas that he had read the poem to an audience of college students and that it had been ’taken pretty seriously … despite doing my best to make it obvious by my manner that I was fooling … Mea Culpa.’ However, Frost liked to quip, “I’m never more serious than when joking.”

So off we go on the road not taken.

En route a finger of fog still extends down the valley over Nicasio Reservoir and the double yellow leads our eye to Elephant Mountain in spring green. Those specks are turkey vultures finding some morning thermals – an auspicious day begins.

We know we’re in the right place because we spot signs for the Parkside Cafe and Bakery and a young guy with a surf board in hand riding a skate board seals the deal. http://www.parksidecafe.com/ We are also early enough to easily find parking places which won’t be the situation later on. 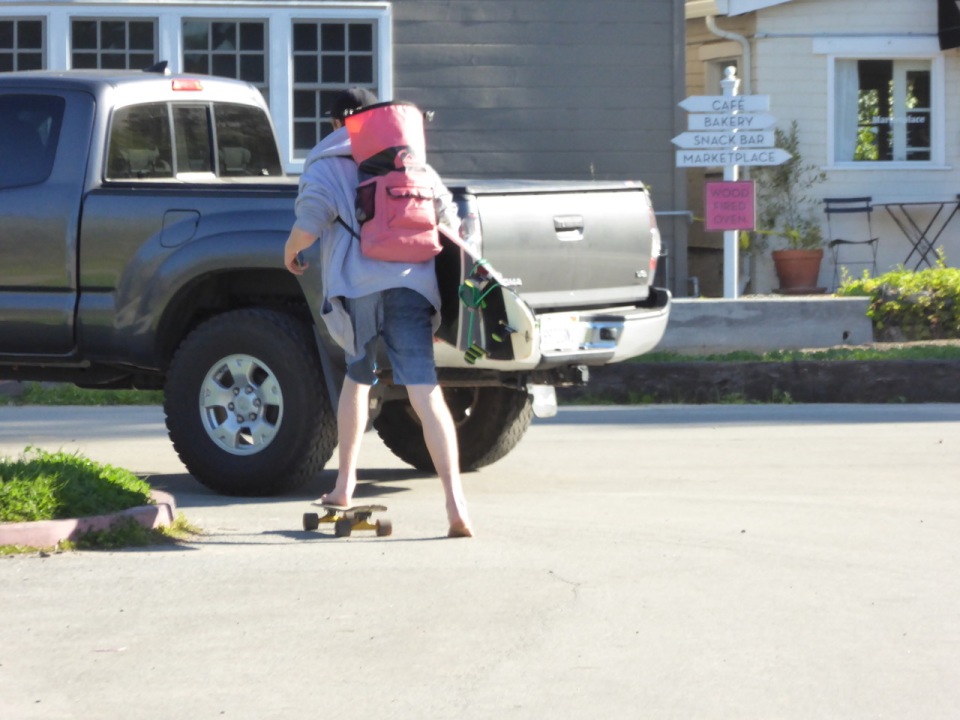 It was Monday after a busy weekend and all of the rest rooms and honey buckets had seen, shall we say, extensive use. Those hoping for relief there had to opt for plan “B” – standing for bushes. Footloose friends look on bemused at the quest having gone that way themselves. 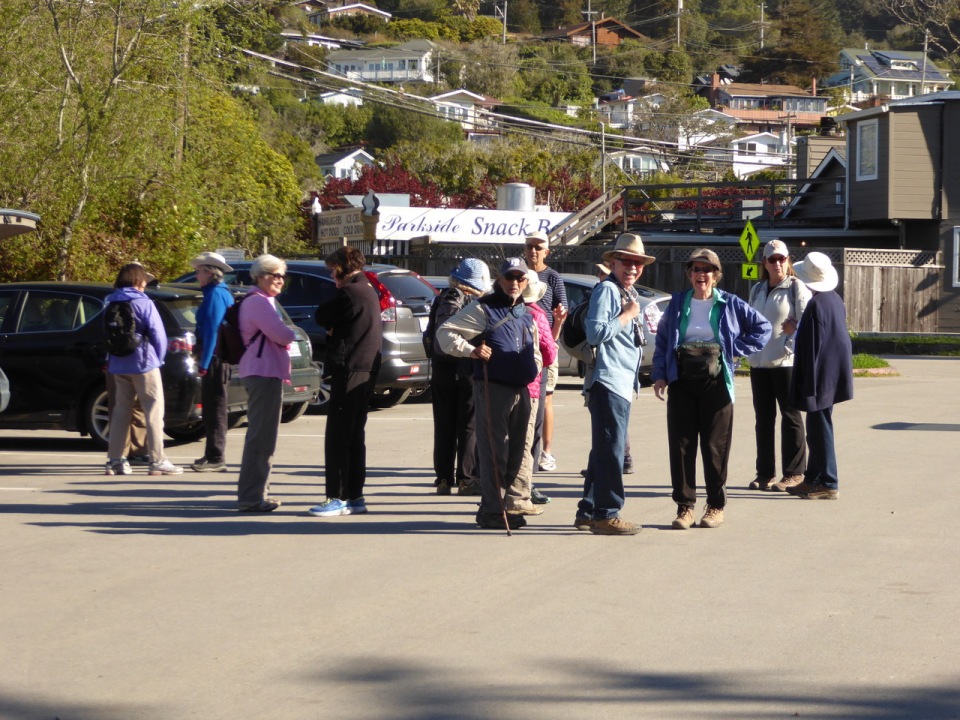 Beginning to feel we really have the highway to ourselves

Michael decided we could drive up to the road closed signs which proved fortunate. Had we made our way along the beach we would have had to scale this hill. Not much activity in this south parking area yet but it is totally packed on weekends. My shadow is by some young Pride of Madeira plants.

What a classic finger point, just like the one you see coming down from a clouds. This one was to spot one the southern Farallon Islands just peeking out from the fog.

Michael was talking about humming birds enjoying a reddish stage of Pride of Madeira (Echium candicans) and avoiding the later blue spectrum. Here’s a different Echium (Wlidpretii) in red https://www.youtube.com/watch?v=4o4qIancWGU with a very attentive hummer. Most guides speak of red as the top attracting color but here’s a small study with contrary conclusions with some Anna’s Hummingbird observations. https://www.westernfieldornithologists.org/archive/V15/15(1)%20p0023-p0028.pdf
But the preponderance of sources proposes that they are attracted to brightly colored flowers – yellow, orange, pink and purple but red most of all. http://homeguides.sfgate.com/color-flowers-attract-hummingbirds-48562.html

Here’s a sequence of Pride of Madeira along the highway. It creates a spectacular and arresting display and is still sold by normally responsible nurseries. It’s not broom and you can see why gardeners would be attracted to this plant. But it is an exotic that can invade and dominate native plant habitat.
http://www.cal-ipc.org/ip/management/plant_profiles/Echium_candicans.php
https://www.sanelijo.org/plant-guide/pride-madeira-not-native https://en.wikipedia.org/wiki/Echium_candicans

Spying some warblers in the hillside bushes next to the roadway Michael initially thinks some may be a migrants passing through but eventually decides that we have spotted an Orange-crowned Warbler (Oreothlypis celata) which is resident in this area. David Lukas writes appealingly in his BAY AREA BIRDS: “Every year, there is a thrilling moment when Orange-crowned Warblers suddenly appear and announce the coming spring with bright trilling songs.” They arrive just “in time for the newly unfurling oak leaves that host huge numbers of bright green, oak moth caterpillars that help sustain the warblers and their hungry nestlings.” These foraging birds “are active, frenetic feeders, nearly always in motion while searching for caterpillars in the canopy. Utilizing a wren-like probing behavior, they poke their fine bills into leafy tangles or even forage while hanging upside down.” P.236 He continues that they prefer to nest on steep brushy slopes which was exactly what we were looking at. https://www.allaboutbirds.org/guide/Orange-crowned_Warbler/id http://www.audubon.org/field-guide/bird/orange-crowned-warbler 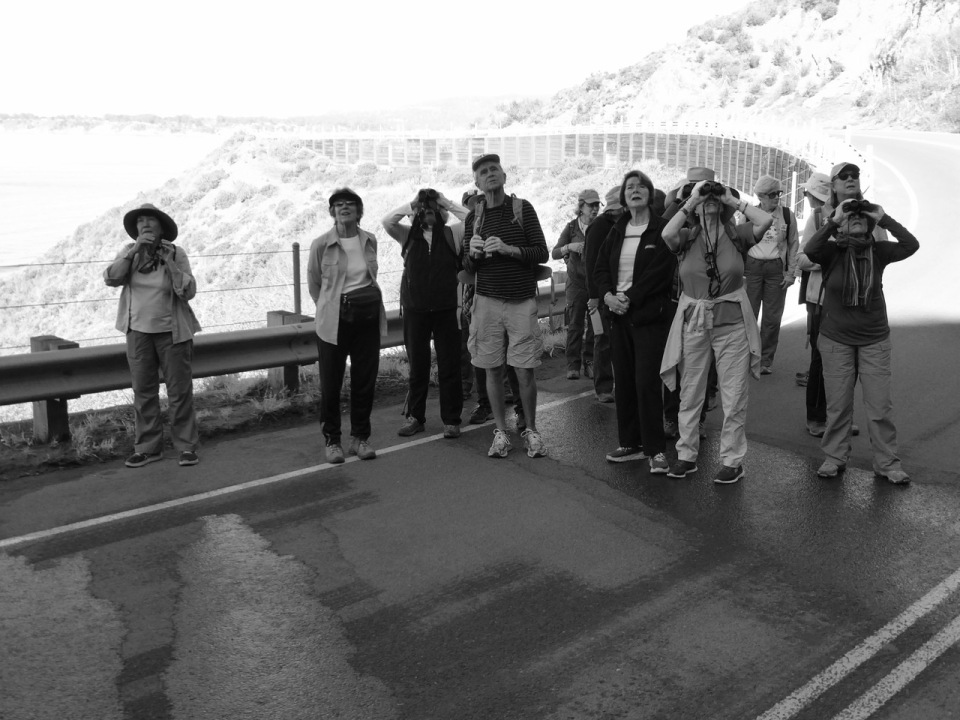 Caltrans repair work proceeds all around us. Here they are vacuuming out rocks that have blocked drainage from the hillside. 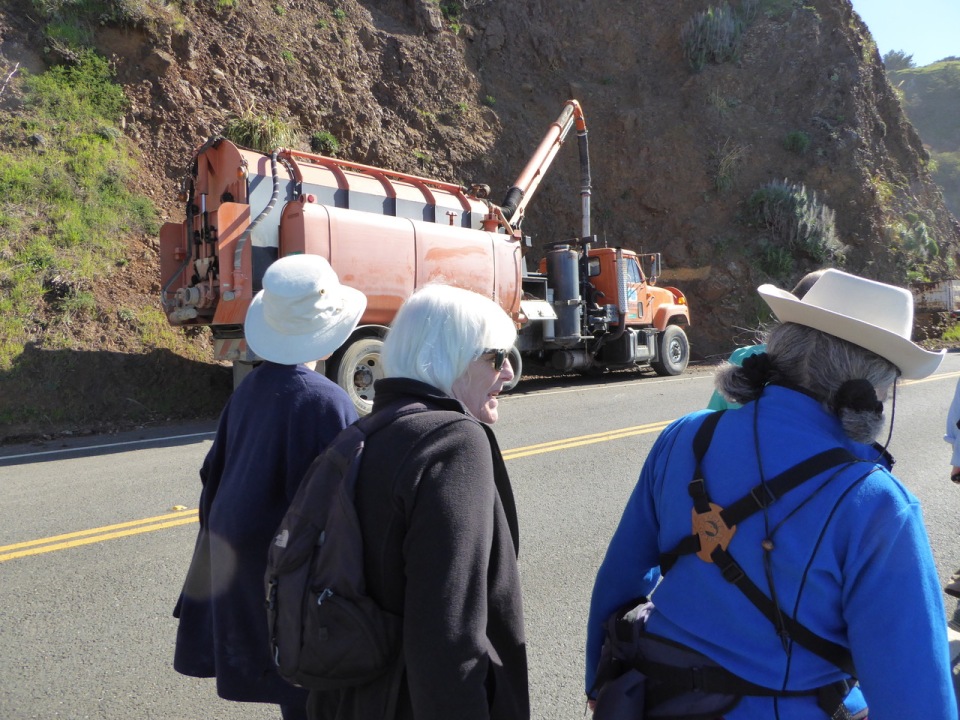 Above Larry in the midst of a fishing story perhaps. A Caltrans crew is working on roadside debris – we spy their honey bucket behind the van with fascination. Below a big semi brings in steel girders to shore up the road at the other end of the closure by Muir Beach. Considering the twisting roads the driver navigated to get here with a 50’ + long load, we imagine he’s as happy as the proverbial clam to have the roadway opening up before him.
http://www.marinij.com/general-news/20170316/work-on-storm-damaged-highway-1-progresses 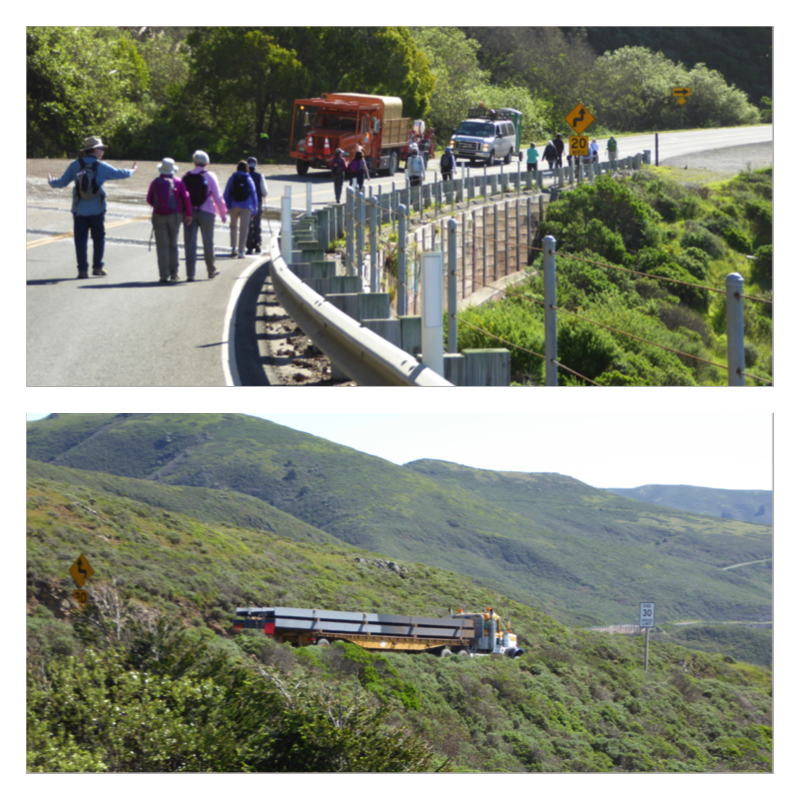 The stalwart group crests a section of highway with the light green of springtime spreading up the hill dominated by a large, gray rock exposure. “The road follows close to the trace of the San Andreas fault all the way between San Francisco and Point Area. West of the fault, it is on the Salinian block, part of the Pacific Plate. East of the fault, it is on the Franciscan rocks of the North American Plate, the stuff that was jammed into the oceanic trench while it defined the plate boundary. Most of the rocks along the coast are somber Franciscan sandstones, along with the occasional outcrops of colorful radiolarian chert, greenish black pillow basalt, and serpentine. The Franciscan sandstones are fairly dark where they are exposed in the sea cliffs. A crust of lichens paints a coat of pale gray on outcrops in the hillsides above the road.” P. 186, Roadside Geology of Northern and Central California, Mountain Press Publishing Company, 2016.

Talking about the Farallone Islands just outside San Francisco Bay which is a very rich area for marine life from krill to Blue whales with everything in between. “On July 24, 1579, English privateer and explorer Sir Francis Drake landed on the islands, in order to collect seal meat and bird eggs for his ship. He named them the ISLANDS OF SAINT JAMES because the day after his arrival was the feast day of St James the Great. The name of St James is now applied to only one of the rockey islets of the North Farallones.” https://en.wikipedia.org/wiki/Farallon_Islands http://farallones.noaa.gov/

Michael relates a rare experience sailing out to this Island of Saint James: https://vimeo.com/208940733

Time for a picnic on a promontory as Margie continues Larry’s fish story. 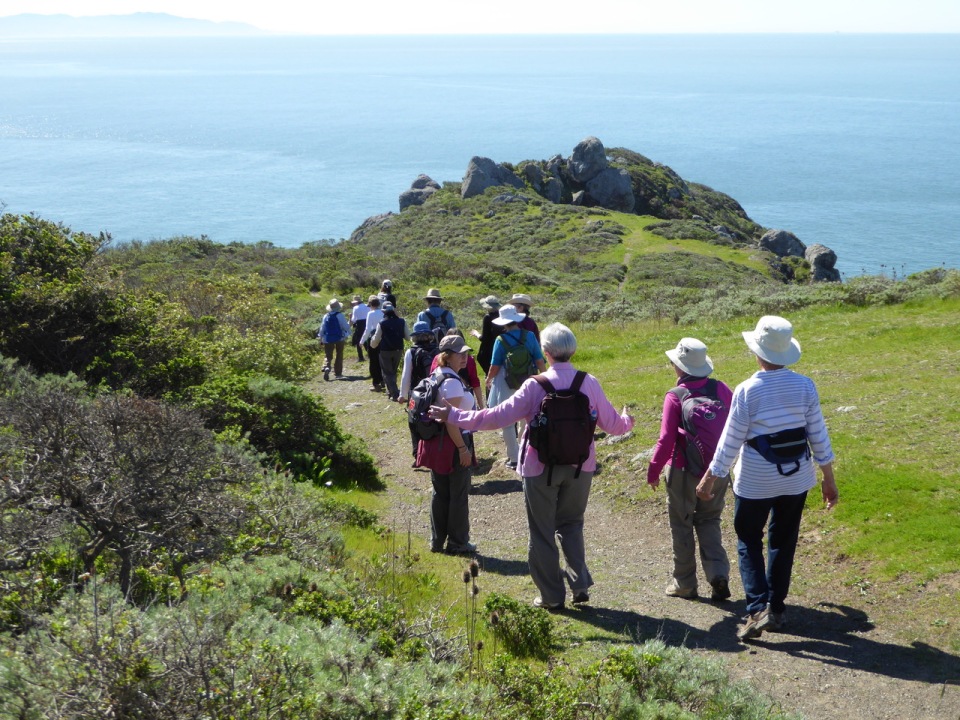 Navigating a sharp cleft on the way to the lunch spot, you know that the round boulder hasn’t finished its trip – perhaps just a small earthquake, Michael finds a neat view on the upside of the boulder and as we lunch in this “picnic” area really less traveled.

Lunch gave an opportunity to enjoy some wildflowers in this pristine area starting [clockwise] with the Footsteps of Spring (Sanicula arctopoides) in the carrot family. These were fresh and buffed out while some we’ve seen have hugged the ground more closely, Blue Dicks (Dichelostemma capitatum) in the Lily Family. “The corms were an important source of starch in the diet of California Indians. Traditional gathering sites were visited annually over long periods of time.”
Remy Parker, P. 168,
Western Wallflower (Erysimum capitatum) in the Mustard Family. McHoul notes that the “Greek word means to help or save, because of the plants supposed medicinal value. The specific name means a ‘head’ referring to the fairly dense form of the compact flower cluster.” p.12, finally Checker Mallow (Sidalcea malvaeflora) in the Mallow Family. Sidalcea malviflora – Wikipedia

Armand is the first up from the picnic spot taking his ease on our “ribbon of highway” giving us a great John Muir pose.

Looking across the Bolinas mesa towards the peninsula of Point Reyes National Seashore extending out into the Pacific with the white of the Lighthouse just catching the sun.

Reconstructing an eroded hillside with native planting. http://www.dot.ca.gov/hq/env/stormwater/pdf/CTSW-RT-04-069-01-1.pdf This is technical and definitely for extra credit.

Sharing the road on the way back we see some Plein Air painters, you recall that we saw another group awhile back at Shollenberger Park in Petaluma. http://www.artistdaily.com/topics/plein-air-art, bicyclers on the uphill and then on the downhill and a bumper sticker I hadn’t seen before – it appears they like owls too.

Some rocks we got to know along the coast

A raven perhaps gathering nesting material, we were wondering if this was a joint venture? This entry on the rich Cornell Lab of Ornithology website writes that males may bring some sticks but most of the building is done by females. https://www.allaboutbirds.org/guide/Common_Raven/lifehistory 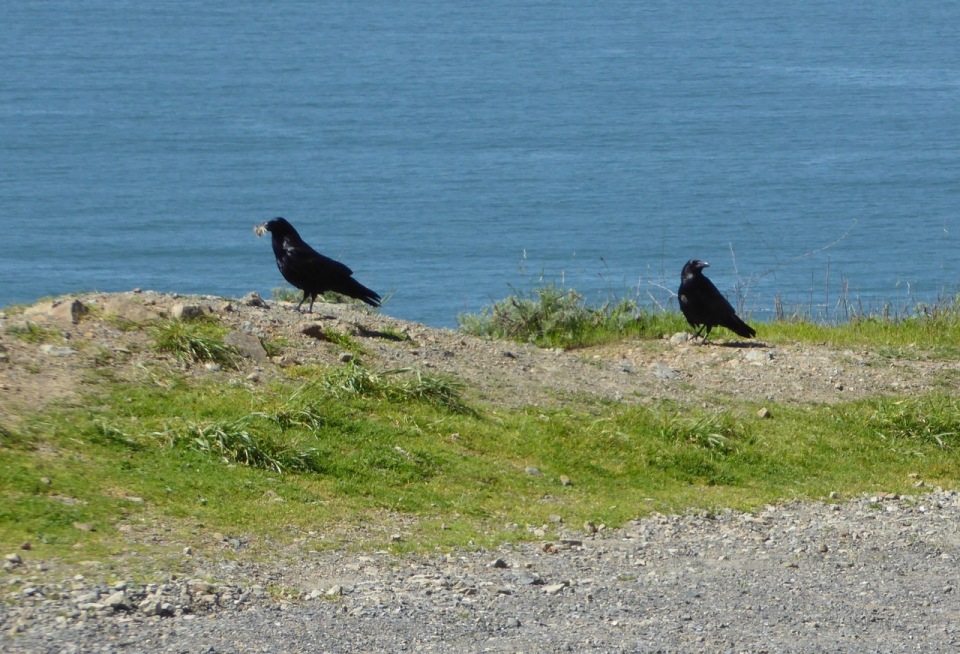 Some of us spotted a rancher filling up his 5 gallon jugs of water from this spring and thought we’d give it a try too. 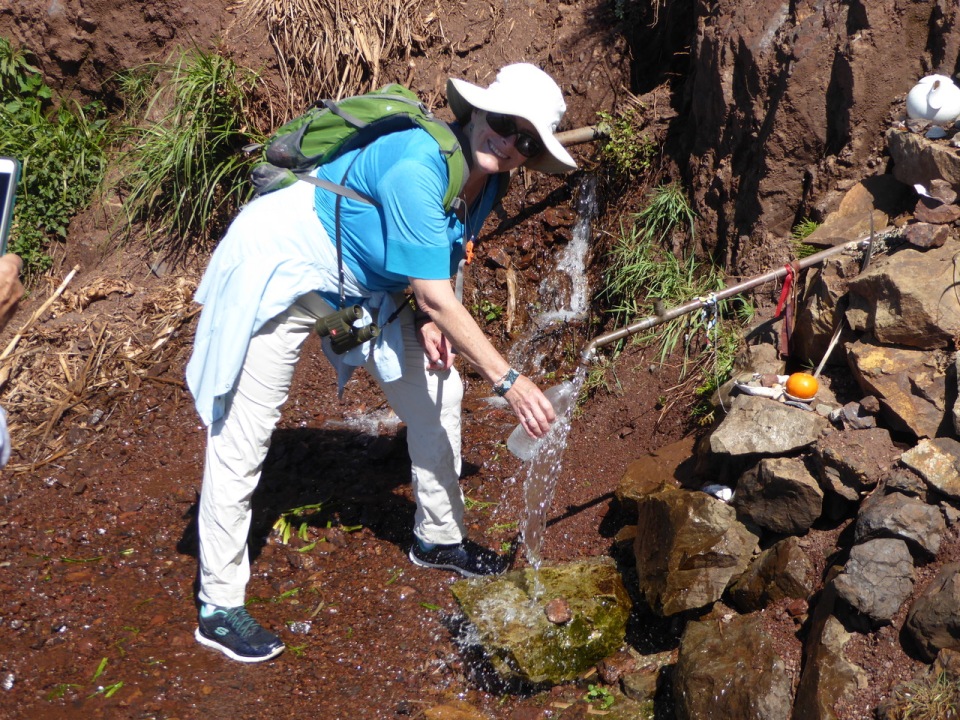 Back to the traffic and heading home 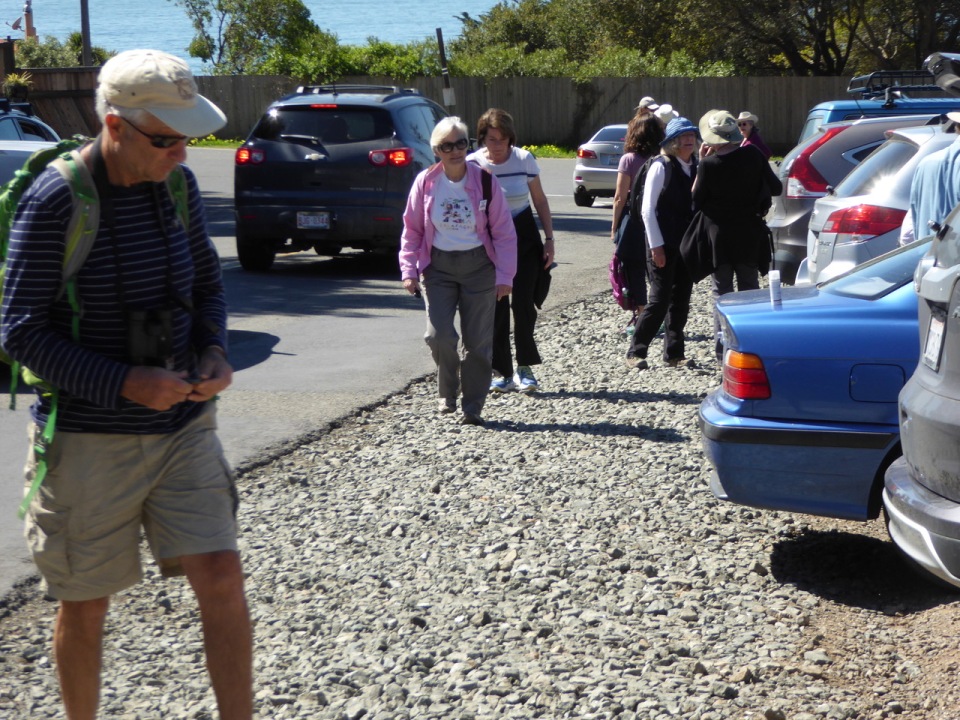 And a final souvenir – Sisyphus takes a break for lunch.